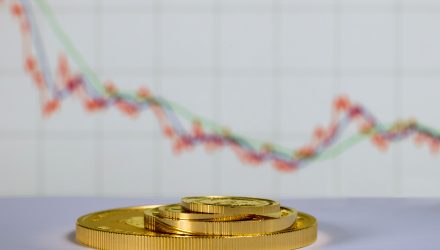 Gold Slumps to Lowest Level of the Month as Dollar Gains

Gold fell ahead of first-quarter earnings season as the dollar gained while the precious metal slumped to its lowest level of the month on Thursday.

Gold fell 1.23 percent at the close of Thursday’s trading session to settle at a price of $1.295.15. Nonetheless, analysts maintain that this is only a temporary setback.

“I do believe that for the time being the Fed is going to continue to sit on its hands and just monitor the situation carefully. The evidence of this comes from the fact that the gold price is still trading above the $1,300 mark. For bulls, this is a critical level, it sends a strong signal of recovery and hope. As long as the price stays above this critical mark, we have hope that the price may cross the $1,350 level,” Aslam said.

Related: Getting Cautious on Treasuries When Adding Exposure to U.S. Debt

Despite signs of a global economic slowdown, however, figureheads like Federal Reserve Vice Chairman Richard Clarida are throwing their support behind the U.S. economy, saying it has room to grow. A decade following a punishing financial crisis, Clarida said “the current economic expansion almost certainly will become the longest on record.”

Wall Street analysts are expecting a less-than-stellar earnings season for the first quarter as big banks like J.P. Morgan and Bank of America are scheduled to kick off reporting on Friday. Investors are looking at a 4.3 percent year-over-year reduction in earnings growth, according to FactSet estimates.

“It may only be a matter of time as concerns about rising levels of negative-yielding debt, an inverted yield curve, and the risk of a recession grow,” said Gold. “Gold’s role as a potential risk hedge could grow if the market experiences a bout of volatility in response to these concerns.”