You are at:Home»Beyond Basic Beta Channel»Gold Momentum Gains Heading into 2020 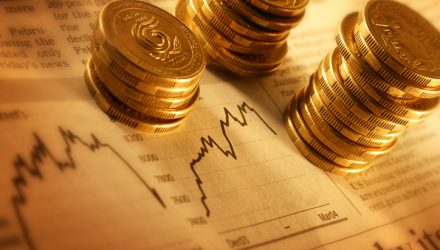 By Joe Foster, Portfolio Manager and Strategist for VanEck Global

The gold market was impressive in December for what didn’t happen over the holidays. Net speculative positioning on Comex has stood near all-time highs since the gold price peaked in September. This potentially made the gold market vulnerable to a selloff, especially during thin holiday trading. However, gold didn’t sell down, it actually trended higher into year-end. This price action suggests that positioning has experienced a structural shift to higher levels as investors have become comfortable holding long positions. For the month, gold advanced $53.29 (3.6%) to $1,517.27 per ounce.

The gold market found support from the dollar as the U.S. Dollar Index (DXY)1 fell to the bottom of its recent range. Gold was also supported by strong advances in metals prices, especially copper and palladium, as the U.S. and China put their economic war on hold on December 14 to announce details of the first stage of a trade deal.

Gold wasn’t deterred by the booming stock market, which continued to post all-time highs. It has become obvious to us that stocks are being pumped up by liquidity supplied by the U.S. Federal Reserve (Fed) and corporate buy-backs. According to the Wall Street Journal, in 2019 through December 5, investors pulled $135 billion from U.S. stock-focused funds for the biggest annual withdrawal on record. Investor selling has been more than offset by net corporate purchases, which Goldman Sachs figures will total $480 billion in 2019. Meanwhile, since September, the Fed has pumped over $400 billion into the financial system with its purchase of treasuries aimed at propping up the dysfunctional repo market. The Fed plans to continue these purchases into 2020 at the rate of $60 billion per month. Gold was able to trade higher with the stock market because a market that trades on liquidity, rather than fundamentals, is vulnerable to shocks, a drop in liquidity or other risks.

Gold stocks had a strong advance in December with industry mergers and acquisitions (M&A) dominating the news. There were seven M&A deals announced involving 12 companies in the last two months of 2019, which is possibly the most we have seen in just two months. Four of the deals were asset sales whereby mid-tier companies are buying non-core mining properties located in Canada, Australia and Senegal from super-majors Barrick and Newmont. The other three deals were mergers or acquisitions, each with a different deal structure (as seen below). To gauge the market reaction to these three deals, we looked at the two-week performance after the deal announcement for each company relative to the NYSE Arca Gold Miners Index (GDMNTR)2:

The market clearly favored the all-cash and merger-of-equals (MOE) deals over the all-stock premium deal. We believe there are three reasons for this: 1) cash and MOE deals are structures that limit speculation from arbitrageurs, 2) premium stock deals have a legacy of destroying value for shareholders, and 3) investors frown on large, potentially dilutive quantities of stock being issued. In the longer term we believe that all of these deals will create value, however, we can’t over-emphasize the importance of properly structuring a deal so that the newly formed combination moves forward with positive performance and enthusiastic support from shareholders.

Reasons For Continued Optimism in 2020

Gold and gold stocks had outstanding performances in 2019. The gold price surged $235 per ounce (18.3%). The leverage of gold stocks to the price of gold was on full display, as the GDMNTR gained 41.6% and the MVIS Global Junior Gold Miners Index (MVGDXJTR)3 advanced 42.5%. Encouragingly, we believe that there are several reasons for continued optimism for gold and gold stocks in 2020.

The interest rate environment has become very supportive of gold prices. Real rates on one-year treasuries turned negative in 2019. The Fed cut rates three times in 2019 and, while on hold at the moment, might continue the rate cutting cycle later in 2020. The chart below shows that gold performs well as real rates fall below two percent, with improving performance as real rates become more negative. This is because gold is seen by many as a better store of value than bonds when real rates are negative. Also, deeply negative real rates are usually accompanied by stressful levels of inflation or deflation that drive investors to gold as a safe haven.

Gold Can Really Shine With Sub-2% (or Negative) Real Rates

The dollar experienced significant strength from 2014 to 2016 and again in 2018. This was the result of globally superior U.S. economic performance, which has been priced into the dollar. As a result, with its best performance behind it, the DXY drifted sideways in 2019, while gold rose against most currencies. Without above-trend U.S. gross domestic product (GDP) growth and with the uncertainty and potential chaos of the 2020 presidential election, we doubt that the dollar presents headwinds for gold.

And, If All Else Fails…

Looking further into the new decade, long-term cycles in debt, the economy, stock markets and the social/political realm may culminate in financial difficulties that we haven’t seen since the Global Financial Crisis and social unrest that we haven’t seen since the sixties. Already we are seeing an escalation in tensions in the Middle East with the January 3 U.S. airstrike in Iraq. The overwhelming sovereign debt that continues to grow is unsustainable, while corporate debt levels are worrying. Likewise, negative-yielding debt in Europe and Japan makes little financial sense. Ludwig von Mises said there are only two ways to end a credit-fueled boom: “The first is to withdraw the credit. The second is the utter debasement of the currency.” Also known as a debt jubilee, helicopter money, monetization or Modern Monetary Theory, von Mises’ second option has been chosen throughout civilization. The Romans and Weimar Germany are prominent historic examples, while Zimbabwe and Venezuela are modern examples. In the midst of a future crisis, debt monetization might again become the solution of choice in the U.S. and other major economies. The Dutch National Bank website suggests a post monetary debasement financial structure: “If the system collapses, the gold stock can serve as a basis to build it up again. Gold bolsters confidence in the stability of the central bank’s balance sheet and creates a sense of security.”

All company, sector, and sub-industry weightings as of December 31, 2019 unless otherwise noted.

1U.S. Dollar Index (DXY) indicates the general international value of the U.S. dollar by averaging the exchange rates between the U.S. dollar and six major world currencies.2NYSE Arca Gold Miners Index (GDMNTR) is a modified market capitalization-weighted index comprised of publicly traded companies involved primarily in the mining for gold.3MVIS Global Junior Gold Miners Index (MVGDXJTR) is a rules-based, modified market capitalization-weighted, float-adjusted index comprised of a global universe of publicly traded small- and medium-capitalization companies that generate at least 50% of their revenues from gold and/or silver mining, hold real property that has the potential to produce at least 50% of the company’s revenue from gold or silver mining when developed, or primarily invest in gold or silver.

Nothing in this content should be considered a solicitation to buy or an offer to sell shares of any investment in any jurisdiction where the offer or solicitation would be unlawful under the securities laws of such jurisdiction, nor is it intended as investment, tax, financial, or legal advice. Investors should seek such professional advice for their particular situation and jurisdiction.

Any indices listed are unmanaged indices and include the reinvestment of all dividends, but do not reflect the payment of transaction costs, advisory fees or expenses that are associated with an investment in a Fund. Certain indices may take into account withholding taxes. An index’s performance is not illustrative of a Fund’s performance. Indices are not securities in which investments can be made.

About VanEck International Investors Gold Fund (INIVX): You can lose money by investing in the Fund. Any investment in the Fund should be part of an overall investment program, not a complete program. The Fund is subject to the risks associated with concentrating its assets in the gold industry, which can be significantly affected by international economic, monetary and political developments. The Fund’s overall portfolio may decline in value due to developments specific to the gold industry. The Fund’s investments in foreign securities involve risks related to adverse political and economic developments unique to a country or a region, currency fluctuations or controls, and the possibility of arbitrary action by foreign governments, or political, economic or social instability. The Fund is subject to risks associated with investments in Canadian issuers, commodities and commodity-linked derivatives, commodities and commodity-linked derivatives tax, gold-mining industry, derivatives, emerging market securities, foreign currency transactions, foreign securities, other investment companies, management, market, non-diversification, operational, regulatory, small- and medium-capitalization companies and subsidiary risks.