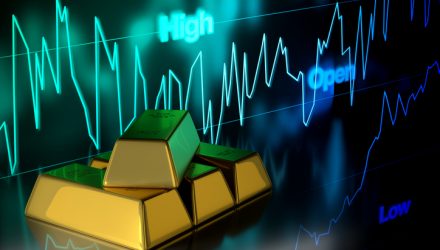 Gold is also catching a bid because some market observers believe with low inflation and the potential for a slowing economy, the Fed may step in and cut interest rates multiple times before the end of this year to go along with the rate revealed last month.

“The inversion, which has predicted the last five U.S. recessions, ‘is reigniting fears of an imminent recession in the U.S. And gold is catching a bid off that,’ says TD Securities commodity strategist Daniel Ghali,” reports Seeking Alpha.

With gold’s recent strength and the yellow metal’s status as a safe-haven investment, analysts have recently been boosting price targets on the commodity. Some have even renewed calls for gold to hit $2,000 per ounce.

Related: Look For This Level To Buy Gold, Says Expert

Investors should also consider what triggered the latest yield curve inverse and that scenario, while ominous, is good for gold.

“Looking at what led the yield curve to invert — a lot of global macro picture is pointing to slowing global growth, which we’ve known for some time. But, the question is whether the slowing global environment will eventually lead to slowing U.S. economy or ultimately drag the U.S. economy into recession,” said Ghali in an interview with Kitco News.