We are seeing some EM “green shoots” in the predominantly negative global growth dataflow. Can EMs buck the DM trend for much longer?

The global growth dataflow remains predominantly negative, adding to recession concerns. A surprising drop in Germany’s business expectations survey reminded that Europe’s gas/growth story has further to run – so the recent very sharp decline in the economic surprise index for the region might be extended (see chart below). The economic surprise index for the U.S. is also not doing great – it moved even deeper into negative territory, and today’s downward revision of the University of Michigan’s survey might lead to further growth downgrades. Note that emerging markets (EM) as a whole are still doing OK on this metric – i.e. the economic surprise index is still positive. The question is whether EMs can buck the developed markets (DM) trend going forward.

The widening gap between China’s official 2022 growth target (around 5.5%) and the consensus growth forecast (cut further to 4.18%) is a major concern, because this is happening despite the easing Omicron drag, seemingly impressive stimulus initiatives (“33 measures”), and even some upside surprises in domestic activity. The next batch of China’s domestic activity gauges (on June 29) will be closely watched for signs of a more sustained rebound – the current expectation is that both the manufacturing and (importantly) services Purchasing Managers’ Indexes (PMI) will return to expansion zone in June.

One EM region where we are seeing more “green shoots” is Latin America (LATAM). Brazil’s recession scenario is out the window – a sequential increase in June’s consumer confidence rhymes nicely with this view. A good thing is that the economy is improving but far from overheating, which gives the central bank room to gradually exit its very aggressive tightening cycle as inflation appears to be topping out. Colombia is now expected to expand by nearly 5% in real terms this year – from the market’s point of view, the key issue is that the incoming leftist administration uses the growth “cushion” wisely when implementing its policy agenda. Finally, Mexico’s economic activity started Q2 on a positive note – stronger than expected in April – albeit now we will have to factor in more rate hikes’ frontloading after yesterday’s 75bps increase. Stay tuned!

Chart at a Glance: Can EM Economic Surprises Stay Positive?* 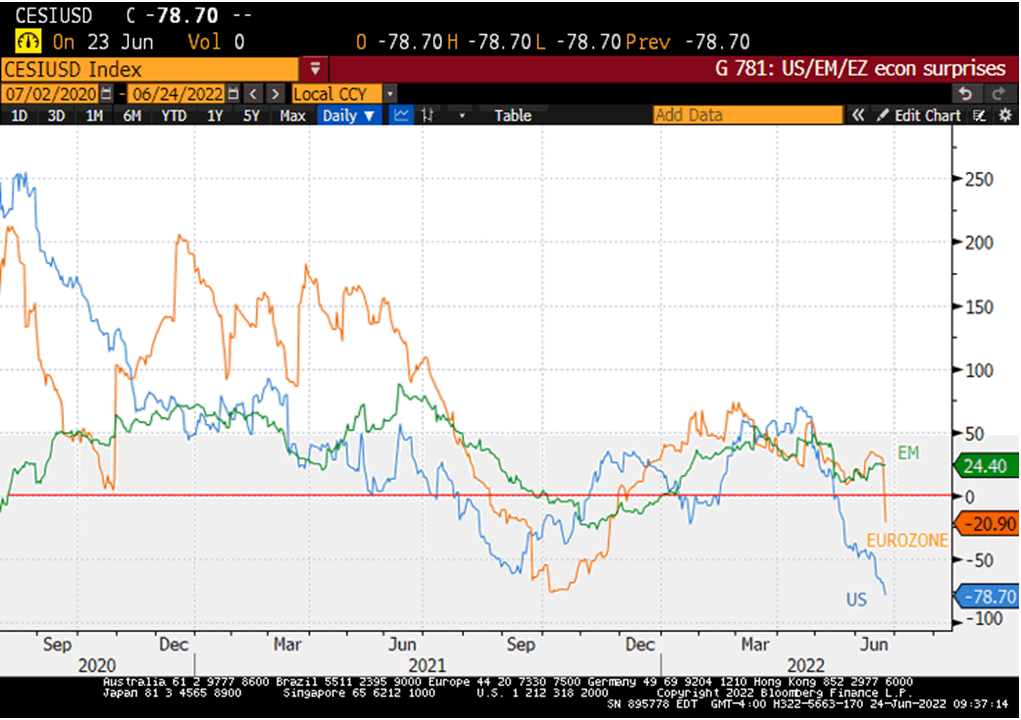