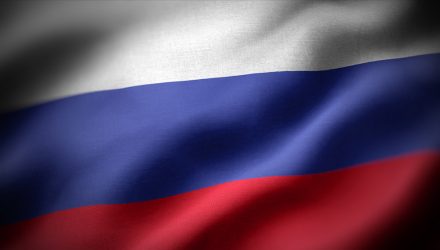 FTSE Russell and MSCI — the index providers for some of the largest emerging markets exchange traded funds — are leveling harsh treatment of Russian stocks as that country escalates armed conflict with Ukraine.

Next week, both index providers will dump Russian equities from their indexes. International fixed income benchmark sponsors are in the process of doing the same, and that could affect ETFs such as the VanEck J.P. Morgan EM Local Currency Bond ETF (NYSEArca: EMLC).

“On March 2, Fitch cut Russia’s sovereign rating by six notches to B (on negative watch), citing rapidly tightening sanctions and a severe shock to credit fundamentals. It is just a matter of time before Russia will be excluded from global bond indices,” says Natalia Gurushina, VanEck chief economist.

That’s relevant for EMLC investors because the $3.4 billion fund follows the J.P. Morgan GBI-EM Global Core Index, and as of January 31, it had a 4.48% allocation to Russian bonds, according to issuer data.

In other words, when JPMorgan finally decides to ultimately exclude Russian bonds from its indexes, which it’s likely to do, EMLC is likely to have no exposure to Russian debt at some point in the very near future. That could actually work in favor of investors because due to sanctions levied by the West, Russia’s central bank is all but paralyzed and may be unable to do anything to combat inflationary pressures over the near term.

“An interesting – albeit most likely theoretical – question is what happens to Russia’s inflation going forward, as a major recession and a significantly weaker currency (the ruble was down by nearly 40% since mid-February) will be pulling in the opposite direction. We suspect that Russia has a good chance to join Argentina and Turkey in the ’50+’ inflation club in the coming months,” adds Gurushina.

Another benefit of Russia eventually being ejected from EMLC’s roster is that the ruble is in free fall and the fund holds bonds denominated in local currencies. Looked at differently, the longer Russia remains a part of the EMLC portfolio, the longer the country is likely to be a drag on the fund.