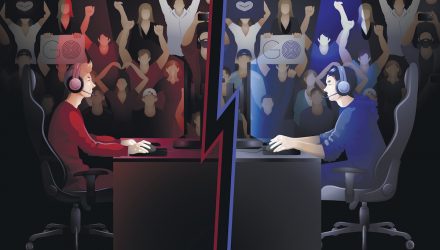 The VanEck Vectors Video Gaming and eSports ETF (NYSEArca: ESPO) continues to be bolstered by an array of favorable fundamental factors.

As its name implies, ESPO is designed to provide investors with exposure to the e-sports phenomenon as well as the video game industry. The fund tracks the track the performance of the MVIS® Global Video Gaming and eSports Index (MVESPO). The index is a rules-based, modified capitalization weighted, float adjusted index intended to give investors a means of tracking the overall performance of companies involved in video gaming and eSports.

Data continue confirming that the eSports industry is booming.

“If you’re wondering how massive esports has become, just follow the money,” reports Venture Beat. “The livestreaming platform Twitch paid $90 million for the rights to the Overwatch League. Activision Blizzard, creator of Overwatch, beat its revenue forecast for Q1 2019, in part because of its esports initiatives. If you combine fan spend, media rights, and sponsorships, the esports market is now worth an estimated $922 million.”

Bolstering the case for ESPO as a long-term investment is the willingness of advertisers and marketers to spend on eSports events and venues.

“Marketers have noticed the growing audience for esports,” according to Venture Beat. “Brands such as Coca-Cola, Kit Kat, and Cox Communications have done some sort of an esports sponsorship recently. The value of these deals are not public knowledge, but it’s a good bet that they are hefty. Marketers, rightfully so, want to be part of a growing phenomenon—one that has a captive audience and a passionate fanbase.”

“But while esports is hot, it’s important for companies to understand the value of these marketing investments,” reports Venture Beat. “As the esports market matures and airing on major networks such as ABC, NBC, ESPN, and TBS, there will be more opportunities to reach both casual and fanatic viewers. Understanding the impact of these activations now can help you capitalize on the growth of esports.”