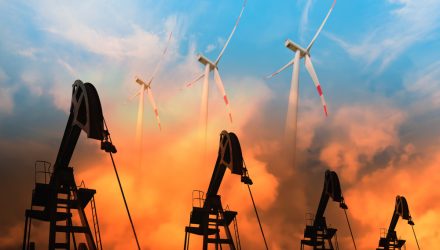 When a major oil-producing country is at the epicenter of geopolitical conflict, it’s not surprising that oil prices rise. That scenario is playing out as Russia invades neighboring Ukraine.

The other predictable result is that when oil prices soar, renewable energy stocks often follow suit on the basis that high crude prices should stoke more interest in and demand for clean energy sources. With that movie playing today, the VanEck Vectors Low Carbon Energy ETF (SMOG) is higher by 6.57% over the past week while the S&P 500 is barely in the green over the same period.

“While that’s been a boost for traditional oil and gas stocks, renewables have been on a strong run. Solar specialist Sunrun (RUN) has gained 33% since the invasion began, Sunnova Energy International (NOVA) is up 32%, and Sunlight Financial (SUNL) is up 26%. NextEra Energy (NEE), the world’s largest producer of wind and solar energy, has risen 7%,” writes Morningstar analyst Leslie Norton.

NextEra, the utility with significant renewables exposure, is SMOG’s second-largest holding at a weight of 8.04%, according to issuer data. Sunrun and Sunnova Energy International are smaller components in the exchange traded fund.

With Eastern Europe in the spotlight due to the aforementioned armed conflict and the broader continent’s dependence on Russian energy under the microscope, it’s not surprising that some of SMOG’s European holdings are also rallying.

Vestas and Orsted combine for almost 10% of the ETF’s weight while Siemens Gamesa is a smaller SMOG holding. Overall, the $269.4 million ETF is home to 70 stocks, which is a broad lineup relative to some other funds in this category. SMOG tracks the MVIS Global Low Carbon Energy Index.

With the U.S. and Europe combining for over two-thirds of SMOG’s geographic exposure, the fund is a relevant energy idea over the near term as investors in both regions are reminded about the importance of energy independence.

“Instead, the invasion underlines the importance of energy independence. In the United States, for example, a winter storm is rolling into Texas, just a year after a winter storm left millions without access to electricity for days. That has made solar and other renewable energies more valuable,” concludes Morningstar’s Norton.