You are at:Home»Beyond Basic Beta Channel»ETFs To Consider As Russia’s Economy Faring Better Than Expected 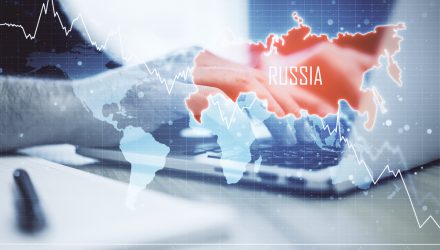 ETFs To Consider As Russia’s Economy Faring Better Than Expected

Exchange-traded fund (ETF) investors looking to add some diversification to their portfolios with overseas exposure can opt for countries like Russia. The Russian economy appears to be faring better than expected even with the economic impact of Covid-19.

Per a recent Bloomberg report, Russia only recently “became only the fourth country to report more than 1 million cases of Covid-19, its economy is coming through the pandemic better than most other big emerging markets. Analysts say the outlook could yet improve.”

“When the pandemic broke out, Russia was in pretty good shape: low inflation, low unemployment, stable banking sector and huge reserves,” Renaissance Capital Chief Economist Sofya Donets said by phone from Moscow. “If there are no additional shocks, there will be a wave of forecast upgrades for Russia’s economy this year.”

“Renaissance is among the most upbeat on the outlook, forecasting a contraction of 3.3% this year and a 3.8% rebound next,” the article added. “Even the current Bloomberg survey, which shows a 4.8% shrinkage this year, is less than half what the government feared when the virus first hit.”

Russia’s top economic aide forecasted that employment levels could return to pre-pandemic levels as soon as next year. Furthermore, the country expects to become one of the top five economies in the world within that same timeframe.

“Thanks to sanctions back in 2014, Russia has now much smaller reliance on external capital flows, so the shocks from the pandemic have hurt the economy less,” said Elina Ribakova, deputy chief economist at the Institute of International Finance in Washington.

Here are a pair of other funds to consider to get Russia exposure: