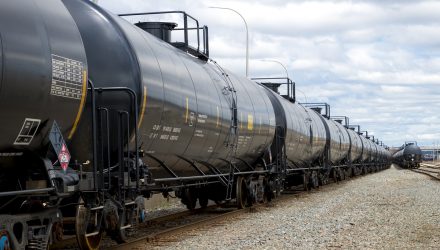 Energy sector ETFs were among the best performing areas of the market Tuesday as crude oil prices pushed higher on reports of attacks on major Saudi facilities that fueled concerns over the kingdom’s ability to maintain its supply.

Saudi Arabia, the world’s top oil exporter, stated that explosive-packed drones attacked two of Aramco’s pumping stations, according to the Associated press. The kingdom revealed drones attacked one of its oil pipelines while other assaults targeted energy infrastructure elsewhere in what it called a “cowardly” act of terrorism.

Energy Minister Khalid al-Falih said that Aramco halted pumps on the East-West pipeline until the damage was assessed but production and exports continued without disruptions, Reuters reports.

The supply risks helped push West Texas Intermediate crude oil futures up 1.0% to $61.6 per barrel on Tuesday while Brent crude futures were 1.3% higher to $71.1 per barrel.

“Volatile prices have remained the theme of today’s trading session. Heightened geopolitical tensions in the Middle East and anticipation that the United States and China could still reach an amicable solution to their trade dispute have rendered support to oil prices,” Abhishek Kumar, head of analytics at Interfax Energy, told Reuters.

Tuesday’s incident followed a day after Riyadh stated two of its oil tankers were among the four vessels attacked off the coast of the United Arab Emirates on Sunday. U.S. national security agencies believed proxies sympathetic to or working for Iran may have been responsible for the tanker attacks. Iranian officials denied responsibility.

Tehran has been embroiled with the U.S. over stricter sanctions.

“With rising tensions between Iran and the U.S., and with significant naval build-up in the region, markets are sensitive to news and can be tipped by the smallest signs of a conflict,” Mihir Kapadia, chief executive of Sun Global Investments, told Reuters.

What amounts to about a fifth of global oil consumed passes through the Strait of Hormuz from Middle East crude producers to consumers around the world.