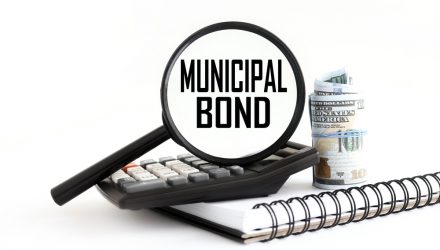 Debate lingers regarding whether or not the U.S. economy is in a recession, but recent GDP data are discouraging, indicating market participants may want to evaluate recession-buffering assets.

Traditionally, investors turn to fixed income assets when recessions set in, but that strategy is imperiled this year due to rising interest rates. Speaking of which, Federal Reserve Chairman Jerome Powell last Friday spooked markets, signaling the central bank will remain aggressive with its rate hikes in a bid to cool inflation. Some traders believe there’s at least a 60% chance the Fed raises rates by 75 basis points following its September meeting.

Logically, some investors are skittish about bonds in the current environment, but some experts see opportunities in municipal bonds for recession protection. On that note, the VanEck Vectors High Yield Muni ETF (HYD) is an exchange traded fund to consider.

“A recession is characterized by a slowdown in consumer spending and an increase in unemployment. This may lead some to believe that at the onset of a recession, tax revenues for state and local governments fall, but this hasn’t been the case. Historically, tax revenues have declined following a recession, but the negative impact is usually long after the recession has already started,” noted Cooper Howard of Charles Schwab.

Tax collection is a primary concern for investors with any municipal bond ETF. Although HYD is a high-yield fund, the ability of its component states to collect taxes, broadly speaking, isn’t a major concern as of yet. For example, California is the ETF’s largest state allocation at 12.6% and revenue in the Golden State is soaring.

Another point in favor of HYD, particularly given its status as a high-yield ETF, is that credit quality across the municipal landscape is improving. That could support HYD’s status as a recession-buffering asset for investors to consider.

“Conditions for most state and local governments are strong, in our view, due to the substantial fiscal support after the start of the COVID-19 crisis. Tax revenues also have been surging, as illustrated in the chart above, which has helped bolster state and local governments’ coffers. To illustrate, rainy-day fund balances, which is money that states have set aside and can use during unexpected deficits, are at near-record levels. Even Illinois, the lowest-rated state, has a rainy-day fund balance in excess of $1 billion. That’s a substantial improvement from February 2020 when it was only $60,000,” concluded Howard.