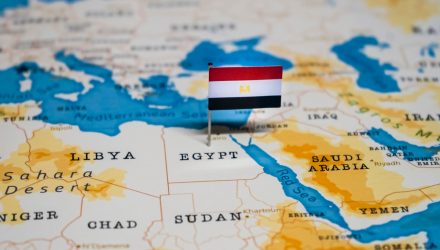 An Egypt country-specific exchange traded fund advanced Monday as Cairo nears a new deal to secure a loan from the International Monetary Fund.

“The government is in the final-agreements stage regarding new financing from the IMF,” Egyptian Premier Mostafa Madbouly said in a statement from his cabinet, according to Bloomberg.

Egypt is counting on the new funding from the IMF as the country struggles with rising food and energy costs in the wake of Russia’s invasion of Ukraine. For instance, Egyptian Supply Minister Aly El-Moselhy on Monday stated that the country is keeping in place bread subsidies, arguing that the time wasn’t right to make changes, even as the country tries to secure an IMF loan. The government previously intended to cut down spending on the costly system, which provides for an estimated 70% of the 100-million-plus population.

The IMF previously required Egypt to make “decisive progress” over fiscal and structural reforms, which would enhance the economy’s competitiveness, improve governance, and enhance its resilience against shocks, Egypt Today reported.

Foreign investors have been exiting the Egyptian financial markets, yanking about $20 billion from the local debt market as conditions worsened.

While Egypt’s Gulf allies have helped with some $22 billion in deposits and investments, more may be needed. The dignitaries from Bahrain, Iraq, United Arab Emirates, and Jordan are in Egypt for a five-country Arab summit that could cover further investment and trade cooperation.

Meanwhile, Egypt has been in talks with the IMF for months on a so-called Extended Fund Facility on a more favorable exchange rate for the Egyptian pound. The country’s pound currency devalued by 15% in March, and some observers argued that the currency could weaken further to diminish a funding gap.