You are at:Home»Beyond Basic Beta Channel»Dip in Vietnam ETF Could Spell Opportunity 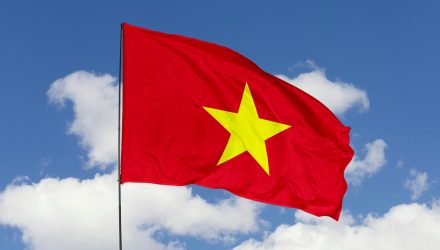 The VanEck Vectors Vietnam ETF (VNM) is among the single-country exchange traded funds sagging this year, but Vietnamese stocks have long topped those in other comparable Asian markets indicating that there could be a buying opportunity.

Vietnam’s benchmark VN Index is slumping on par with other countries in the region this year, but some investors view Vietnamese stocks as inexpensive, particularly when accounting for what’s expected to be robust earnings growth this year.

“Dragon Capital, a Vietnam-focused investment firm with $7 billion in assets under management, says valuations in the country are now cheap, and have forecast earnings per share growth of over 20% in 2022,” reported Eustance Huang for CNBC.

“Banking stocks have a big potential for growth in the mass market segment as more than half of Vietnam’s population is currently ‘underserved’ in banking, while retail stocks are set to see a strong recovery in earnings from post-pandemic pent-up demand,” reported CNBC, citing Ngo.

Both banking and consumer cyclical stocks in Vietnam could be in for attractive long-term growth forecasts because the country is experiencing increasing urbanization and is home to a growing middle class. Additionally, as a result of that burgeoning middle class, domestic consumption is on the rise. A long run of stellar GDP data supports that notion.

“The Southeast Asian economy has seen been among the economies with the highest GDP growth in recent years, and Dragon Capital sees that momentum continuing. In 2020, the Vietnamese economy topped even China and did not see a single quarter of economic contraction despite the global pandemic,” according to CNBC.

As is the case with so many emerging and frontier markets — Vietnam is classified as the latter — inflation is worth monitoring in the Southeast Asian economy. It could be around 4% to 5% this year, but Dragon Capital’s Ngo tells CNBC the government will likely be proactive in keeping a lid on rising consumer prices. Economists believe Vietnam could post 2022 GDP growth of 6% to 7%.