You are at:Home»Beyond Basic Beta Channel»Come Together, Right Now (Over Gold) 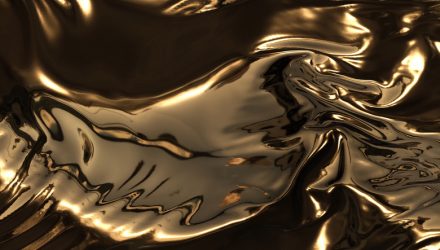 Come Together, Right Now (Over Gold)

By Joe Foster, Portfolio Manager and Strategist for VanEck Global

Complacency in the stock market was on full display in October as the S&P 5001 reached a new all-time high while releases for the Institute for Supply Management (ISM) Manufacturing and Non-Manufacturing indices2, payrolls, retail sales, durable goods orders, industrial production, and Conference Board consumer confidence all fell and/or missed expectations. The weak economic results caused the US dollar index (DXY)3 to fall from the top to the bottom of its 2019 range in October. While the weak dollar was supportive of gold in October, the normally strong inverse correlation has been absent this year. The gold price continued to consolidate its 2019 gains in a narrow range between $1,480 and $1,510 per ounce. Gold was contained in October due to the negative correlation it has shown with the stock market this year, along with a monthly rise in interest rates. Treasury yields rose even though the Fed cut the Federal Funds Rate4, as expected. For the month, gold gained $40.55 (2.75%) per ounce closing at $1,512.94 on October 31. Gold and gold stocks ended the month at the top of their recent consolidation range as the Chinese expressed doubts about the chances for a long-term trade deal with the U.S.

The gold market appears resilient given the lack of strong catalysts lately. While many measures of the economy have deteriorated, third quarter GDP growth, while anemic, came in above expectations and unemployment remains at historic lows. Nonetheless, we believe the potential for systemic financial stress is keeping the gold price elevated as a safe haven asset. What gold investors see that the stock market might be ignoring, in our view, are signs that the post-crisis asset bubble is bursting. Unlike 2000 or 2008, there is no discernable bubble focused on a single asset class. The chart below shows that, instead, the totality of asset values amounts to a historic bubble. Perhaps WeWork’s valuation plunge from $47 billion to less than $8 billion and other disappointments in the private company space amount to the beginnings of a bubble bursting that the public equities are ignoring?

Household Financial Assets as a Percentage of Disposable Personal Income

Time for Gold Singles to Mingle?

Of all the mining industries, gold is possibly the most fragmented, and in our view, the gold industry and its investors would realize considerable benefits from consolidation. Pollitt & Co. estimates that, whereas 50% of global iron ore and copper production comes from four and 10 companies, respectively, 25 companies account for just 45% of total gold production.5 Technical talent seems to be spread thin, too. An internal Resource Capital Fund study reported that 107 mining projects that went from feasibility study through to construction were 38% over budget, on average.6

We believe the most potential for synergy and value creation rests among the large number of single-asset companies. Historically, such companies were merger and/or acquisition (M&A) targets for larger producers. However, producers have become reluctant to pursue M&A because:

The lack of M&A has resulted in an abundance of single-asset companies. An investment manager may now have a gold portfolio of, for example, approximately 20 single-asset developers and five single-asset producers. These are the companies that are providing many new mine developments across the sector. When investing in a development company, shareholders expect to benefit when the company either gets acquired at a premium or when it successfully takes its project to production. In this M&A environment, developers must plan on becoming mine builders and operators. Once a developer becomes a producer, we expect it to have its next project in view in order to grow into a mid-tier multi-mine company.

Consolidation of single-asset companies to form larger multi-mine companies can unlock these benefits, and the shift in valuation has great potential. For example, let’s create a hypothetical “Mergco” with three companies that are currently single-asset: Detour Gold, Pretium Resources and Sabina Gold & Silver. According their respective September 2019 corporate presentations, Detour and Pretium combined produce roughly 1.1 million ounces per year from their two mines, while Sabina has a shovel-ready project that could produce over 200,000 ounces per year. All are large projects in Canada with long mine lives. Mergco would have a combined market cap of $5.2 billion and, using RBC Capital Markets valuations, trade at a weighted average Price/Net Asset Value (P/NAV) of 0.83X.7 Contrast this with Kirkland Lake, which, according to its September 2019 company reports, also has roughly one million ounces of production, mainly from two mines in safe jurisdictions of Canada and Australia. Kirkland has several exploration and development projects that may bring future growth. It has a market cap of $9.4 billion and trades at a P/NAV of 1.92X. We argue that with good management and the advantages of larger scale, Mergco could achieve a valuation that should be closer to Kirkland’s. In a merger of equals, Mergco’s share price would have to increase by 131% to match the P/NAV valuation of Kirkland. Achieving a re-rating of just half of this would still be a windfall to Mergco’s shareholders. In addition, a merger without premiums would reduce arbitrageur positioning, potentially freeing the stock to trade higher.

There are many combinations of single-asset companies around the world that we believe would benefit from such consolidation, so why have we not seen such combinations?

We believe it is time for single-asset gold companies and their shareholders to reconsider the M&A landscape and adapt new strategies that will build the mid-tiers and majors of the future.

All company, sector, and sub-industry weightings as of October 31, 2019 unless otherwise noted.

1NYSE Arca Gold Miners Index (GDMNTR) is a modified market capitalization-weighted index comprised of publicly traded companies involved primarily in the mining for gold. 2MVIS Global Junior Gold Miners Index (MVGDXJTR) is a rules-based, modified market capitalization-weighted, float-adjusted index comprised of a global universe of publicly traded small- and medium-capitalization companies that generate at least 50% of their revenues from gold and/or silver mining, hold real property that has the potential to produce at least 50% of the company’s revenue from gold or silver mining when developed, or primarily invest in gold or silver. 3S&P 500 Index measures the stock performance of 500 large companies listed on stock exchanges in the United States and covers approximately 80% of available market capitalization.4Institute for Supply Management (ISM) Manufacturing and Non-Manufacturing indices are widely-tracked indicators of recent U.S. economic activity based on surveys of purchasing managers and supply executives across a broad range of U.S. manufacturing and non-manufacturing sectors and industries.5U.S. Dollar Index (DXY) indicates the general international value of the U.S. dollar by averaging the exchange rates between the U.S. dollar and six major world currencies.6Fed Funds Rate is the interest rate at which banks and other depository institutions lend money to each other, usually on an overnight basis.7Pollitt, Douglas. “Gold companies = gold bullion? What everyone seems to want…” Pollitt & Co. October 2018. 8Harris, Paul. “Want investors? Do a better job!” Mining Journal May 2019. 9RBC Capital Markets (8 October 2019). Precious Metals & Minerals Weekly Valuation Tables.

Nothing in this content should be considered a solicitation to buy or an offer to sell shares of any investment in any jurisdiction where the offer or solicitation would be unlawful under the securities laws of such jurisdiction, nor is it intended as investment, tax, financial, or legal advice. Investors should seek such professional advice for their particular situation and jurisdiction.

Any indices listed are unmanaged indices and include the reinvestment of all dividends, but do not reflect the payment of transaction costs, advisory fees or expenses that are associated with an investment in a Fund. Certain indices may take into account withholding taxes. An index’s performance is not illustrative of a Fund’s performance. Indices are not securities in which investments can be made.

About VanEck International Investors Gold Fund (INIVX): You can lose money by investing in the Fund. Any investment in the Fund should be part of an overall investment program, not a complete program. The Fund is subject to the risks associated with concentrating its assets in the gold industry, which can be significantly affected by international economic, monetary and political developments. The Fund’s overall portfolio may decline in value due to developments specific to the gold industry. The Fund’s investments in foreign securities involve risks related to adverse political and economic developments unique to a country or a region, currency fluctuations or controls, and the possibility of arbitrary action by foreign governments, or political, economic or social instability. The Fund is subject to risks associated with investments in Canadian issuers, commodities and commodity-linked derivatives, commodities and commodity-linked derivatives tax, gold-mining industry, derivatives, emerging market securities, foreign currency transactions, foreign securities, other investment companies, management, market, non-diversification, operational, regulatory, small- and medium-capitalization companies and subsidiary risks.