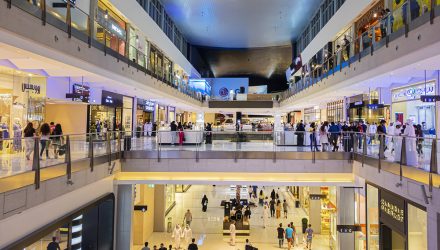 One obvious result of the seismic shift to online retail and e-commerce is that many brick-and-mortar stores, including plenty in malls, are shuttering. Among ETFs, the ProShares Decline of the Retail Store ETF (NYSEArca: EMTY) is the way to play that theme.

The Decline of the Retail Store ETF provides daily short exposure or -1x to the new Solactive-ProShares Bricks and Mortar Retail Store Index, which is comprised of traditional retailers and equally weights components. The fund holds companies including department stores, supermarkets, and sellers of apparel, consumer electronics, and home improvement items, such as retailers like Barnes & Noble, The Gap, Macy’s, Kroger, and Best Buy, among others.

Data confirm EMTY is relevant in the current retail environment.

“As many as 25,000 U.S. stores could close permanently this year after the coronavirus pandemic devastated an industry where many mall-based retailers were already struggling,” reports Kim Bhasin for Bloomberg. “The number would shatter the record set in 2019, when more than 9,800 stores closed their doors for good, according to a report from retail and tech data firm Coresight Research.”

Bolstering the case for EMTY is that 7,600 stores closed earlier this year and by many accounts, that’s not nearly enough, indicating more closures could take place in 2020. Those closures could be hastened by a suddenly fragile economy and orders for people to stay inside due to the COVID-19 pandemic.

“The U.S. has the most retail selling space per capita of any country and the lowest sales per square feet, according to commercial real estate company Cushman & Wakefield. Most retailers have been reluctant to shrink their store networks, but the pandemic has forced many to rewrite their playbooks.,” according to Bloomberg.

Additionally, with markets fretting about companies’ ability to service debt, more indebted retailers, including some EMTY shorts, are viewed as vulnerable. To top it all of for physical retailers, the Coronavirus prompted a major bleeding of market share to online rivals like Amazon.

“American retailers went dark in mid-March in response to the Covid-19 outbreak, and — even though states are now beginning to ease restrictions — many shops are still shuttered or only providing limited service,” according to Bloomberg. “As of June 5, retailers have planned about 4,000 permanent store closures, including hundreds by J.C. Penney, Victoria’s Secret and Pier 1 Imports. In March, before the extent and duration of the virus lockdown was clear, Coresight estimated that about 15,000 stores would shutter in 2020.”