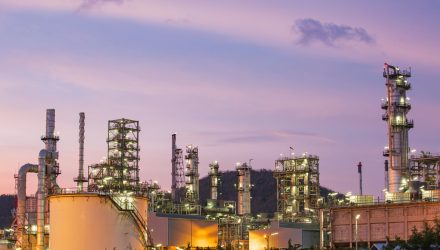 Call on CRAK for Refining Profits

Among sectors, energy is standing out this year and oil refiners are getting in on the act. Take the case of the VanEck Vectors Oil Refiners ETF (CRAK).

The original exchange traded fund dedicated to refiners equities is higher by 12.11% year-to-date while broad market benchmarks are saddled with double-digit losses. To be fair, CRAK is well off its highs of 2022, but recent second-quarter updates from refiners indicate the fund’s member firms could have more upside ahead.

“Valero Energy (NYSE: VLO) one of the largest U.S. independent refiners, said Thursday that its net income in the second quarter reached $4.7 billion, nearly 29 times what it was a year earlier and well above Wall Street expectations. The quarterly profit, a record high, wasn’t far from the full-year profit record it set in 2006. PBF, a smaller refiner, saw net income of $1.2 billion, 24% higher than the number analysts polled by Visible Alpha had penciled in,” reports Jinjoo Lee for the Wall Street Journal.

Valero, which is one of the most cash-rich companies in the U.S, is CRAK’s fourth-largest holding at a weight of 6.23%. The aforementioned PBF Energy Inc. (NYSE: PBF) accounts for nearly 2% of the ETF’s portfolio.

Predictably, investors are worried about the impact a recession will have on the energy sector and refiners equities. Those concerns are amplified following last week’s disappointing second-quarter GDP reading. However, some experts say this recession, assuming it’s a contraction in the traditional sense, won’t be comparable to the global financial crisis.

“Valero’s stock, for example, fell a lot further compared with the rest of the energy sector during the 2007-09 recession, dropping 79% from its July 2007 peak. By comparison, the peak-to-trough difference for a broader basket of energy stocks during that downturn was 55%,” according to the Journal. “Today’s situation is different, of course. Back in 2008, the world was actively adding refining capacity even as demand started falling, said Michael Cusimano, vice president at Pickering Energy Partners.”

Fortunately, CRAK has some avenues with which to endure a recession. In addition to Valero, other marquee domestic refiners on the ETF’s roster, including Marathon Petroleum (NYSE: MPC) and Phillips 66 (NYSE: PSX), have strong balance sheets. Additionally, nearly three-quarters of CRAK’s 25 holdings are ex-U.S. companies. That international diversification could be somewhat beneficial in a recession.