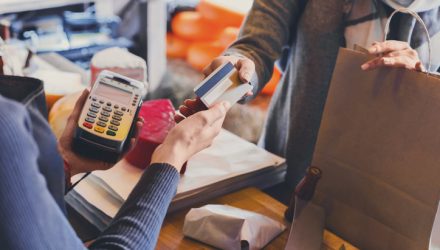 Exchange traded funds focusing on stocks that are big buyers of their own shares, including the SPDR S&P 500 Buyback ETF (NYSEArca: SPYB) and the Invesco Buyback Achievers ETF (NASSDAQ: PKW), are delivering impressive showings this year.

That even as share buybacks dipped a bit in the first quarter, but the decline was not alarming as the first three months of 2019 still represented one of the best periods on record for repurchase plans. First-quarter buybacks in the U.S. reached $205.8 billion.

SPYB focuses on S&P 500 companies with the highest buyback ratio in the past 12 months. The fund tracks the S&P 500 Buyback Index and is home to 100 stocks. That index “screens securities based on the cash value of the actual buyback, not the reduction in number of shares outstanding, in order to more fully capture the shareholder value created by increasing share repurchases,” according to State Street.

Apple Inc. (NASDAQ: AAPL) was once again a buyback giant in the first quarter.

Twenty-five percent of S&P 500 companies decreased their shares outstanding counts by at least 4% in the first quarter.

“Despite the quarterly decline, companies continued to buy back shares in earnest, posting the second highest expenditure on record,” said Howard Silverblatt, Senior Index Analyst at S&P Dow Jones Indices. “With Q2 2019 currently projected to be another strong buyback quarter, investors will need to start separating EPS growth in two categories – actual growth vs. growth from share count reductions. You don’t want to pay the same multiple for buybacks as you do for growth.”

PKW includes a broader selection of U.S. companies that have effected a net reduction in shares outstanding by 5% or more in the trailing 12 months. Not surprisingly, buybacks looked top heavy in the first quarter.