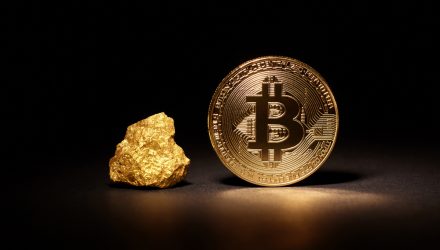 Bitcoin Is Rising, But Some Experts Still Like Gold

GDX seeks to replicate as closely as possible, before fees and expenses, the price and yield performance of the NYSE® Arca Gold Miners Index®. The index is a modified market-capitalization weighted index primarily comprised of publicly traded companies involved in the mining for gold and silver.

It’s difficult to deny gold’s long-standing safe haven preference for investors. Bitcoin has yet to prove its mettle given its relatively short history as a storage of value or investment, according to some analysts.

“Gold has long been considered to be the safe-haven asset of choice, and, while bitcoin is ‘the new kid on the block,’ it’s debatable that it will eat into gold’s market share for a number of reasons,” said Sylvia Carrasco, CEO and founder of the gold exchange platform Goldex. “Bitcoin and gold both have significant advantages over fiat currencies because neither can be diluted or debased.”

“There is a possibility that bitcoin could one day cease to exist through hostile legislation,” Carrasco added. “Some bitcoin derivatives have already been banned. Companies such as Facebook who have attempted to start crypto have been prevented from doing so. So, while bitcoin is a more recent form of investment that is certainly receiving a lot of hype, gold has retained its value through centuries. Whether bitcoin will offer the same level of longevity is highly questionable.”