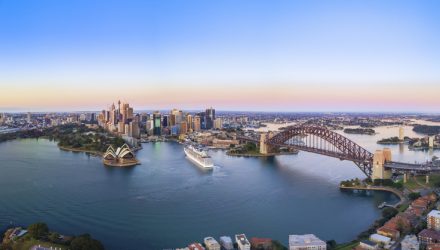 An Awesome Ascent For Australia ETF

The iShares MSCI Australia ETF (NYSEArca: EWA), the largest Australia exchange traded fund listed in the U.S., entered Wednesday with a 20.42% year-to-date and the major local equity benchmark there recently ran to a record high.

As is the case with several other major developed markets this year, stocks in Australia are being fueled by expectations of a dovish central bank, in this case the Reserve Bank of Australia (RBA). The RBA’s dovish stance comes as other global central banks consider more accommodative monetary policies as well to combat the negative effects of slowing global growth and the prospects of a prolonged trade dispute between some of the largest economies in the world.

“Australia’s S&P/ASX 200 Index reached its highest level, having added about $240 billion in value this year as investors cheered a dovish central bank, a surprise federal election victory by the incumbent center-right government and skyrocketing iron ore prices,” according to Bloomberg.

The $1.47 billion EWA tracks the MSCI Australia Index and holds 69 stocks. While interest rates down under are low by the country’s historical standards, EWA still has a distribution yield of nearly 4%, good for one of the highest percentages among developed markets ETFs.

Australian market observers contend that the pace of economic growth needs to accelerate to tighten the job market and the rate cuts could bolster wage growth and restore inflation back to the target band of 2% to 3%.

“The decision by central banks around the world to pull back on interest rate hikes sparked a global equities rally amid bets that accommodative policies could bolster earnings. The Reserve Bank of Australia came out with back-to-back interest rate reductions in June and July, the first changes in policy since September 2016,” reports Bloomberg.

EWA is a heavily cyclical ETF, allocating about 55% of its weight to the financial services and materials sectors. The funds has a three-year standard deviation of 11.70%, according to issuer data.

Economists expect the central bank to continue with rate cuts before the end of the year as projections for GDP growth, inflation and unemployment fall short of targets.

“Analysts disagree on where Aussie stocks will go after this year’s jump, with Citigroup Inc. and Morgan Stanley Wealth Management cheering the surge, and Goldman Sachs Group Inc. downgrading the market to underweight,” notes Bloomberg.