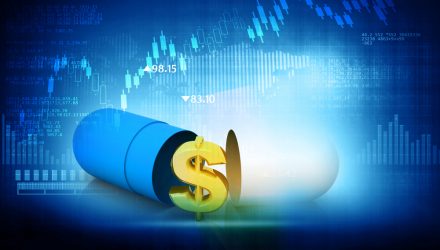 The VanEck Vectors Pharmaceutical ETF (NASDAQ: PPH) is among the healthcare ETFs recently showing signs of life due in large part to the fight against the coronavirus and although this is an election year, there could be more upside to come for PPH and friends.

Of course, there are political considerations to take into when considering PPH and other healthcare ETFs and those considerations increase in importance assuming there’s regime change in Washington.

There are other catalysts to consider, including that the U.S. economy is moving into the late-cycle phase, overall growth may slow and signs of an economic slowdown could pop up. Consequently, investors may also turn to defensive sectors that are less economically sensitive, such as health care. Additionally, healthcare derives a significant portion of its revenue on a domestic basis, meaning it is somewhat immune to the stronger dollar and trade war talk.

“The changes most likely to pass that could realistically influence drug pricing are those encompassed in the Senate’s proposed Prescription Drug Pricing Reduction Act, but we believe this bill holds a less than 50% chance of passing, based on mixed support by both parties, and we haven’t included it in our models,” according to Morningstar. “If it is passed, we estimate a 5% aggregate hit to U.S. branded drug sales from Medicare inflation price caps and Part D redesign.”

Previously, investors embraced healthcare stocks for the sector’s growth and defensive characteristics, providing investors with yields and valuations that are less stretched than other yield-producing stocks like utilities.

“In terms of congressional action, funding was poised to expire in late May for various government healthcare programs, and this could have been a logical time to include drug pricing policy changes. However, this funding was extended through the end of November as part of the economic stimulus in the Coronavirus Aid, Relief, and Economic Security Act, passed in March, without addressing drug pricing,” according to Morningstar.