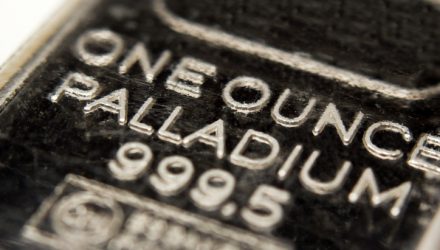 Wanting The Palladium ETF to Repeat 2019 Is Asking a Lot

By now, many investors know about the jaw-dropping climb of palladium and the Aberdeen Standard Physical PalladiumShares ETF (NYSEArca: PALL) in 2019. Simply put, palladium was the year’s best-performing commodity and PALL reflected that bullishness, surging more than 52%.

That was easily enough to make PALL 2019’s best-performing commodities exchange traded product. It’s possible that PALL can generate more upside in 2020, but asking for anything close to a 2019 sequel is asking a lot.

Unlike platinum, the other white metal platinum, which as part of catalytic converters for diesel engines, palladium has benefited from a positive demand outlook that analysts expect to persist as governments around the world aim to meet rising environmental conservation goals. Often overlooked in PALL’s 2019 rally is just how long palladium has been cruising higher.

“The monthly chart illustrates what has been a parabolic trend in the precious metal since it found a bottom at $451.50 in January 2016. At $1875.40, the price was over four times higher since the 2016 bottom,” according to Seeking Alpha. “Over four years, every price correction has been a buying opportunity in the precious and industrial metal. The most recent decline from $1963 to $1808.80 during the week of December 16 was looking like another opportunity to purchase palladium as the price recovered quickly to around the midpoint as of December 30.”

The palladium market is not without its risks. Despite the recent strength, some analysts have warned of a swift turn, underscoring palladium’s tendency for outsize swings when sentiment changes or a reversal in other precious metals like platinum and gold that could drag down the broader precious metals group.

The return to lower interest rates around the world has continued to support demand for physical assets, which tend to exhibit an inverse relationship to interest rates since investors are less apt to hold non-yield-generating raw materials when bonds offer higher yields in a rising rate environment.

“The downside risk in the palladium market has increased dramatically, given the four-fold price increase since January 2016,” according to Seeking Alpha. “The bearish price action and correction on December 20 could be a sign of things to come as volatility is likely to continue to rise with the price of the metal in 2020. Sudden price spikes to the downside could become the norm, and if the deficit expands, price vacuums to the upside could follow.”