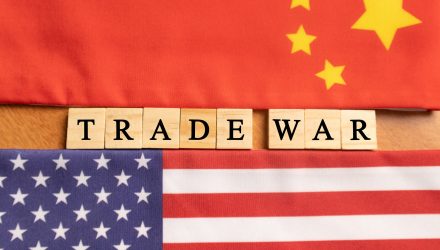 Amid Trade Wars, Approach China Strategically With These ETFs

As trade wars escalate to new levels, China businesses are forced to adapt to this new normal of tit-for-tat tariff wars with the United States. As such, exchange-traded fund (ETF) investors must approach the second largest economy with a strategic bent.

Last week, China announced plans to impose additional duties on $75 billion worth of American goods on Sept. 1 and Dec. 15. In response to these latest measures, U.S President Donald Trump tweeted that his administration would also raise tariffs on $550 billion of Chinese imports.

“I’m convinced the China-U.S. trade tensions is a long-term situation,” said Wei Jianguo, a former vice minister at the Ministry of Commerce. He told CNBC on Sunday that while the Chinese side awaits a fair and equal trade deal, the country has made preparations to counter any negative impact from trade tensions.

“We are not afraid,” Wei, who is currently vice chairman and deputy executive officer at Beijing-based think tank China Center for International Economic Exchanges, said in a Mandarin-language phone interview translated by CNBC.

“I’m convinced the China-U.S. trade tensions is a long-term situation,” said Wei Jianguo, a former vice minister at the Ministry of Commerce.

Additionally, investors should give the VanEck Vectors China AMC China Bond ETF (NYSEArca: CBON) a look. CBON seeks to replicate the price and yield performance of the ChinaBond China High Quality Bond Index, which is comprised of fixed-rate, Renminbi-denominated bonds issued in China by Chinese credit, governmental and quasi-governmental issuers.