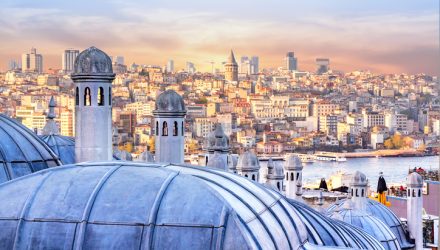 Another Trouble Spot For Turkey ETF

The controversial, much-maligned iShares MSCI Turkey ETF (NasdaqGM: TUR) is up more than 11% this month even as currency market observers fret about the strength of the lira.

This year, it is a weak currency and concerns about the strength of Turkish banks, a relevant concern because TUR devotes 26.65% of its weight to the financial services sector, its largest sector allocation.

“Moody’s Investors Service has today downgraded 18 banks in Turkey,” said the ratings agency in a note out Tuesday. “The local currency long-term deposit ratings, and the local and foreign currency senior unsecured and issuer ratings — where applicable – were downgraded by one notch and the outlooks remain negative.”

A Volatile Bet on Turkey Stocks

Turkish stocks, as TUR has proven at various points, are significantly more volatile than broader emerging markets benchmarks. TUR has a three-year standard deviation of 33%, which is more than double the comparable metric on the MSCI Emerging Markets Index.

Moody’s “rating action follows Moody’s downgrade, on 14 June, of the Government of Turkey’s bond rating to B1 from Ba3 with negative outlook, which also resulted in the lowering of the ceiling for foreign currency deposits to B3 from B2,” said the agency.

While TUR has a price-to-earnings ratio of just over 6, indicating Turkish stocks are cheap relative to the MSCI Emerging Markets Index, stocks there may be cheap for a reason and banks could be that reason.

“Turkish banks high reliance on short-term funding in foreign currency remains a structural weakness, rendering them vulnerable to shifts in investor sentiment and stress scenarios,” according to Moody’s. “This weakness has been a key negative driver of Turkish banks’ ratings for several years. With around 30% of tangible banking assets being funded by wholesale debt, Turkey is one of the emerging countries that is most reliant on market funding. As at April 2019, a sizable USD64 billion of this wholesale exposure was in foreign currency and maturing in the next 12 months.”