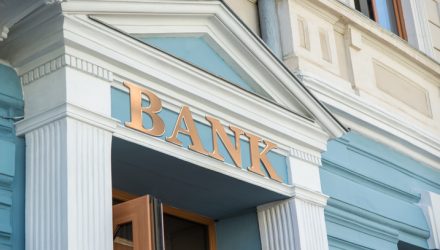 An Important Catalyst For This Bank ETF

As 2020 unfolds, KRE and other regional banks ETFs could have a tailwind: increased mergers and acquisitions activity. That after last year’s pace of deal-making in the industry was the best in two decades.

“Regional bank deals hit a 20-year high in 2019. Regional banks — defined as having between $10 billion and $50 billion in assets — were involved in 35 deals, the highest number since 1999,” reports S&P Global Market Intelligence. “The 2019 activity included five transformative deals that reshaped the regional bank space and laid the groundwork for a potential slew of multibillion-dollar mergers-of-equals.”

An important to the regional banking consolidation thesis is speculation that the bulk of transactions could be front-loaded in the first half of this year.

“Bankers might have a short window to get those deals done. Regional bank M&A is experiencing something of a sweet spot after regulators lifted a key asset threshold,” notes S&P. “But that could change after the 2020 elections, leading to some predictions that large deals will be front-loaded in the year ahead. Meanwhile, the market dynamics driving regional bank M&A remain very much in place, as analysts and investors point to a tough operating environment and the imperative to invest in technology as key drivers of regional bank consolidation.”

“The market has reacted negatively to high-premium transactions where a large bank buys a smaller one at a price above market value,” according to S&P Global Market Intelligence. “The market has made it clear that expensive deals will lead to sell-offs.”