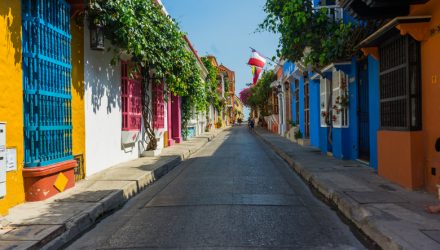 An Emerging Markets Region to Consider

Year-to-date, the iShares Latin American 40 ETF (NYSEARCA: ILF), which is heavily allocated to Brazil and Mexico, is trailing the MSCI Emerging Markets Index, but some market observers believe there’s potential for Latin American equities to bounce back.

While there is plenty of controversy surrounding Argentina’s financial markets following recent primary election results there, the country isn’t a big part of ILF’s roster. Rather, the iShares fund allocates about 84% of its weight to Brazilian and Mexican stocks.

Mexico, Latin America’s second-largest economy behind Brazil, is facing its own challenges. Political unrest ensued in Mexico as the unexpected resignation of Mexico’s Minister of Finance Carlos Urzúa had its toll on Mexican assets following the news. Mexico President Andrés Manuel Lopez Obrador (AMLO) cited disagreements over “development plans for Mexico” as the reason.

While the majority of the capital markets were focused on the U.S.-China trade war, June brought a new opponent to the tariff-for-tariff battle in Mexico. U.S. President Donald Trump turned his attention to Mexico in the latest tariff wars by announcing a 5 percent tariff on all Mexican imports–a move meant to urge Mexico to “reduce or eliminate the number of illegal aliens” entering the U.S.

There are risks facing the two most important Latin American economies, but BlackRock sees opportunities.

“We have downgraded emerging markets to neutral, but we see opportunities in Latin America,” said the asset manager in a recent note. “Valuations are attractive for many of the region’s economies compared to other emerging markets, particularly with respect to earnings expectations. We are not sanguine about the risk of trade tensions but note that easing financial conditions and progress on political reform has already helped drive asset prices this year.”

Brazil is likely to continue cutting interest rates in an effort to jump-start its economy because inflation there is conducive to more rate cuts.