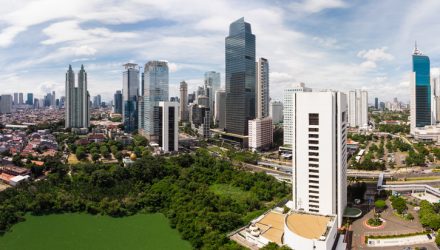 An Emerging Market ETF to be Tactical With in 2020

With many market observers forecasting this to be the year that emerging markets equities finally outpace their U.S. counterparts, investors may want to consider some tactical plays in addition to broader, core developing markets funds.

“Its market value of $529 billion has nearly matched that of slumping Thailand, which snatched the top spot from Singapore in May, buoyed by a strengthening baht. With its currency giving back some gains and economic growth trailing forecasts, the SET Index is the region’s only benchmark to decline in the past three months,” reports Bloomberg.

Some market observers believe 2020 could bring good things for Indonesian stocks. Indonesia is a major exporter of commodities, including palm oil and coal.

Indonesia has been struggling to cut down its widening trade deficit after reaching a record high of $8.5 billion last year, even with authorities raising import taxes and relaxing export rules to tighten the gap. While current account deficits and the US/China trade war have hampered Indonesian equities last year, 2020 could bring better scenarios for IDX.

“Indonesia did hold the most-valuable crown for several short periods between January and April of last year. Before 2019, Singapore was Southeast Asia’s leader the vast majority of the time since at least 2003, when Bloomberg began compiling the data,” according to the news agency.

Even with its newfound heft, the Indonesian equity market is smaller than some individual American companies, such as Apple and Microsoft.