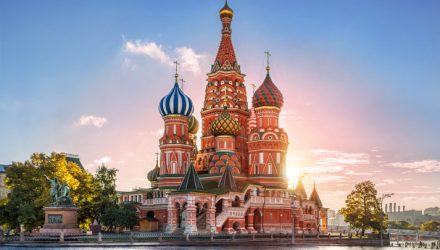 An Adventurous Play on Russia: RUSL

Among emerging markets, it feels like Russia is not getting much attention this year, but the MVIS Russia Index is up 28%, better than triple the returns of the MSCI Emerging Markets Index. Risk-tolerant traders can access soaring Russian equities via the Direxion Daily Russia Bull 3X Shares (RUSL).

RUSL seeks daily investment results, before fees and expenses, of 300% performance of the MVIS Russia Index which invests in Russian stocks. There is no guarantee that these funds will achieve their stated investment objectives.

“Russian stocks surged more than any other international market in June, adding another wrinkle to what is already one of the most closely watched global relationships,” said Direxion in a recent note.

“In the wake of June’s rebound, the MVIS Russia Index (MVRSXTR), which tracks a blend of large- and mid-cap Russian companies, finds itself at its highest level since February 2018.”

Russian crude oil producers have also seen revenue from rising oil magnified due to the weakening ruble currency as crude oil is priced in U.S. dollars, which helped industry achieve record-breaking revenue and shrink debts. While Russia is a dominant oil producing nation and is pumping crude at post-Soviet era records, there is more to the economic story.

“However, despite the hedging, Russian equities have not yet shown signs of slowing. A lot of this momentum can likely be pegged on the surge in crude oil prices thanks to increased U.S. sanctions on Iranian exports and July delivering the largest drop in U.S. inventories of the year,” said Direxion.

“The energy sector makes up more than two-fifths of the Russian index’s components, with the country’s two largest companies—the state-owned Gazprom and NK Lukoil —accounting for a large portion of the index,” according to Direxion.

For traders considering RUSL, it is crucial to remember the fund is a short-term instrument and in this case, oil’s near-term moves can have a sizable impact on RUSL’s daily performances.

“However, Russia bulls should remain abreast of factors that could spoil energy’s resurgence. For one, while U.S. oil inventories experienced their largest weekly reduction of 2019 at 12.8 million barrels according to the Energy Information Administration, net domestic production for the year is still on-par with 2018,” notes Direxion.