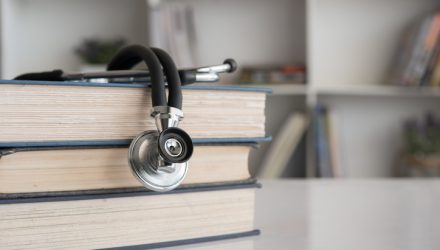 A Strong Start to 2020 For This Healthcare ETF

The iShares U.S. Healthcare Providers ETF (NYSEArca: IHF) scuffled through much of 2019 before gaining some momentum in the fourth quarter. Now, some analysts believe dips in managed care stocks could be buying opportunities.

Up almost 3% year-to-date, IHF hasn’t yet delivered a legitimate dip. IHF is a traditional index fund that targets U.S. equities in the healthcare providers sector. Specifically, the ETF provides exposure to U.S. companies from health insurance, diagnostics, and specialized treatment. The fund continues to remain attractive as Medicare For All talk wanes.

“Cantor Fitzgerald analyst Steven Halper wrote that news that the Trump administration is moving forward on a plan to switch federal funding of state Medicaid programs to a block-grant model could hurt stocks of managed-care companies,” reports Josh Nathan-Kazis for Barron’s.

A recent Wall Street Journal article indicates the Trump Administration is planning to reveal a plan that would allow states to revert “Medicaid funding to a fixed federal block-grant model. The plan, long supported by Republicans, has faced Democratic opposition, and seemed dead,” according to Barron’s.

That is seen as making IHF components, such as UnitedHealth (NYSE: UNH), CVS (NYSE: CVS) and Centene (NYSE: CNC) vulnerable. Those stocks combine for over 41% of IHF’s roster. Bottom line: President Trump and Republicans are looking for some kind of healthcare victory because it’s an issue the party has struggled with for some time.

Healthcare could remain a key player running up to election time, as it is a hotly debated topic due to aging Baby Boomers and cost-cutting efforts by Congress.

“Conventional wisdom suggests that if the Federal government were to move away from the current match program to block grants, states would reduce spending and eligibility levels for its Medicaid programs,” according to Halper, the Cantor analyst, as reported by Barron’s.