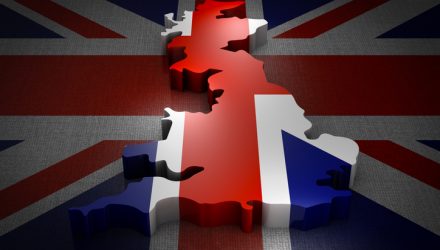 A Critical July for the UK ETF

The iShares MSCI United Kingdom ETF (NYSEArca: EWU), the largest U.K.-related exchange traded fund listed in the U.S., is up almost 14% year-to-date, but the benchmark U.K. fund could be tested this month as the country faces another change in leadership.

At issue is replacing Teresa May as prime minister and the U.K.’s ongoing Brexit effort. Theresa May stated she will quit as the British prime minister once her Conservative Party picked out a successor, potentially opening the way for a new leader to put up a no-deal departure from the European Union, The Wall Street Journal reports.

Earlier this year, May announced her resignation after failing to repeatedly to push through a satisfactory Brexit divorce agreement she negotiated with the E.U. The Conservative party will officially begin looking for a replacement after May steps down on June 7, and the new PM will probably only take over this month.

“The list of candidates has now been whittled down to the final two: Boris Johnson and Jeremy Hunt. The new leader will be announced the week of July 22,” said BlackRock in a recent note.

“Initially, front-runner Johnson threatened a no-deal Brexit if necessary while Hunt has signaled a more flexible approach,” said BlackRock. “However, recently Johnson’s comments around Brexit and the logistics of leaving without a deal have left many confused as to his full understanding of how the process works or where he really stands with regards to leaving the EU. Watch this space as election uncertainty may create volatility for the region in the next few months.”