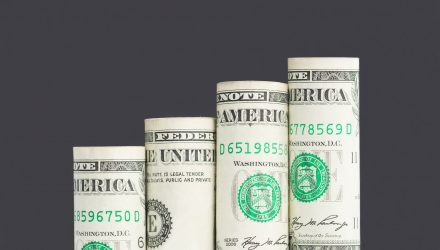 3 ETFs to Take Advantage of a Rising U.S. Dollar

The U.S. dollar has been the pushy salesman who won’t take no for an answer when it comes to potential declines from a more dovish Federal Reserve. On Tuesday, the greenback gained against the British pound and the euro in a display of more surprising strength.

The gains in the dollar come even as the central bank alluded to no more rate hikes for the rest of 2019 after initially forecasting two as it kept rates unchanged last month. The capital markets initially expected rates to remain steady after the central bank spoke in more dovish tones following the fourth and final rate hike for 2018 last December.

Of course, less hikes and a rate cut would translate to dollar weakness, but the greenback has been snubbing that notion as of late. The U.S. ICE Dollar Index, a key measure for the dollar against 12 other currencies, has been on an upward trajectory since April 2018.

That strength has also allowed the index to stay above its 200-day moving average the past six months:

Of course, a stronger dollar is translating to indigestion for gold traders–the precious metal has taken a back seat with the precious metal falling one percent on Tuesday to settle at a price of $1,274.05 as of 1:30 p.m. ET.

“Relative growth differentials and sentiment have dictated terms in global FX markets this month,” said Elliot Clarke, an economist at Westpac, in a recent note to clients. “US growth outperformance, both with respect to potential and against key trading partners such as Europe, is central to this US dollar rally.”

Can the dollar maintain its strength against tangible safe-haven assets like gold and other precious metals? Here are three exchange-traded funds (ETFs) to consider for the greenback bulls: