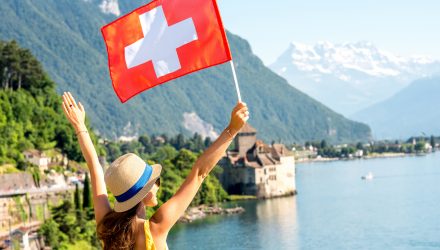 With Swiss stocks on a roll to start 2018, the same is true of the iShares MSCI Switzerland Capped ETF (NYSEArca: EWL). EWL, the largest exchange traded fund dedicated to stocks in Switzerland, gained more than 2% last week.

Last Friday, EWL was one of nearly 300 ETFs to hit record highs as stocks in Switzerland did the same for the first time in a decade.

“The SMI on Friday climbed to a fresh intraday peak of 9,557.06, topping its June 2007 high. Its heavy weighting of defensive shares such as drugmaker Novartis AG and food company Nestle SA have made it a 2018 favourite at Morgan Stanley, whose strategists predict ‘trickier’ year for global equities and are overweight Swiss shares,” reports Bloomberg.

“Switzerland’s benchmark climbed 14 percent last year, almost twice as much as the Stoxx 600. Novartis, Nestle and Roche Holding AG, which comprise more than half the index, also contributed the most to gains,” according to Bloomberg. “A weaker franc in 2018 will offer further support for Swiss equities to outperform, Morgan Stanley strategists led by Graham Secker wrote in a Nov. 26 note. They also noted good earnings momentum and an indicator of economic output near to a four-year high relative to Europe.”