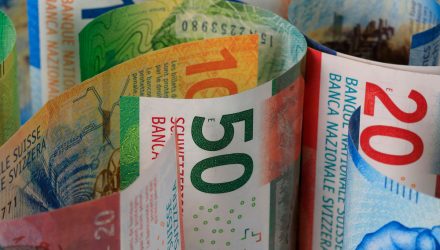 The Swiss franc-related exchange traded fund has plunged this year, with the currency trading at parity with the U.S. dollar for the first time since late 2019, as Switzerland’s safe-haven status erodes.

The dollar-franc pair rose to 1.00 on Thursday, as the Swiss currency weakened over 8% against the greenback in 2022.

While the Swiss franc has traditionally enjoyed a safe-haven status in times of global risk aversion, the U.S. dollar has emerged as the true safety play in this inflationary environment. Traders have watched on as the Swiss National Bank lagged behind the Federal Reserve in hiking interest rates, Bloomberg reports.

As the Fed maintains an increasingly hawkish tone on its monetary policy outlook, the franc has struggled in recent weeks. Meanwhile, the dollar has strengthened to near two-decade highs against a basket of global currencies, gaining on safe-haven demand in face of global economic and geopolitical risks.

“The move in USDCHF was largely due to the fact that the downturn in global risk appetite today wasn’t purely isolated to Europe,” Simon Harvey, head of foreign-exchange analysis at Monex Europe, tells Bloomberg. “This left the dollar as a cleaner haven expression.”

The bullish trend in the franc against an equally-weighed basket of the euro and the dollar for the past five years “has come to an abrupt end,” Lee Hardman, MUFG Bank currency strategist tells Bloomberg. The weakness in the franc has come on building expectations for a faster policy shift out of the European Central Bank and the Fed.

“Right now, confidence is shaken among market participants and people are in no mood to take on risk,” Fawad Razaqzada, an analyst at City Index and FOREX.com, says in a note. “Even when we see periods of relative calm, it doesn’t last very long.”