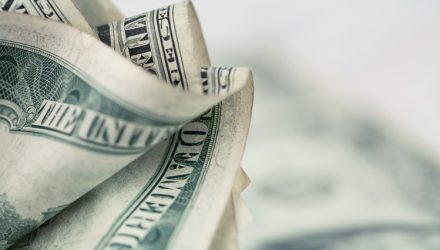 For much of 2017, the dollar has been a disappointment among the major currencies, but there are signs that trend is reversing in the fourth quarter. The PowerShares DB U.S. Dollar Index Bullish Fund (NYSEArca: UUP), the exchange traded fund proxy for the U.S. Dollar Index (DXY), is up more than 2.2% since the start of the current quarter.

However, a strong dollar comes with some disadvantages, too.

“The greenback’s biggest decline in more than a decade has helped bolster profits at multinational companies like Apple Inc. (NASDAQ: AAPL) and Microsoft Corp. (NASDAQ: MSFT),” reports Bloomberg. “It’s one reason why stocks with high foreign sales currently are beating analyst estimates 57 percent of the time, while those with purely domestic revenue are doing it only 23 percent of the time, data compiled by Bank of America show.”

Although the dollar and UUP have struggled against the backdrop of two interest rate hikes by the Federal Reserve, some currency market observers see potential for the greenback to rally in the second half of 2017. The rising euro has also been a problem for the dollar, but some market observers believe the common currency is set to pullback.