You are at:Home»Investing»Strong Fundamentals Give This Coffee Fund a Jolt 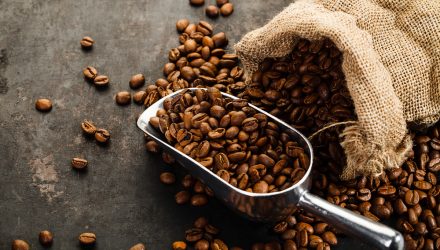 Strong Fundamentals Give This Coffee Fund a Jolt

A coffee-related exchange traded note was among the standouts on Friday as cocoa futures maintain their momentum on strong fundamentals.

On the supply side, coffee prices are finding support from transportation issues and problems in Brazil. Brazil, the world’s biggest coffee producer, is facing one if its worst droughts in almost a century, the Wall Street Journal reported.

Brazil’s farmers are facing one of their biggest shortfalls in output in almost two decades after months of drought have damaged crops. Consequently, according to the U.S. Department of Agriculture, Brazil’s total coffee harvest for 2021 is projected to plunge by the biggest year-over-year amount since 2003, with arabica crop forecasted to be almost 15 million 132-pound bags smaller than last year.

“I’ve been growing coffee more than 50 years, and I’ve never seen as bad a drought as the one last year and this year,” Christina Valle, a third-generation coffee grower in Minas Gerais, told the WSJ. “I normally take three months to harvest my coffee; this year it took me a month.”

Further adding to the supply side woes, the Brazilian real is appreciating against the U.S. dollar.

In addition, shipping bottlenecks have delayed shipments from large global producers like Brazil and Vietnam.

“The whole supply chain suffered not only a significant increase in costs but also massive delays,” Carlos Mera, head of agri-commodities market research at Rabobank, told the WSJ, adding that unlike other commodities, which can be shipped on bulk carriers, coffee can only be moved around the globe in containers.