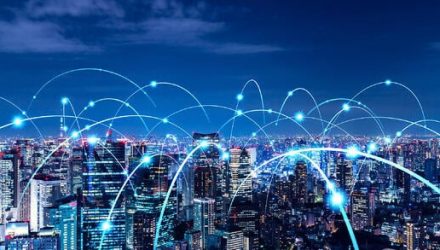 COVID-19 lockdowns not only sped the digitalization of media entertainment, but they also accelerated permanent shifts in consumer behaviors that are now driving strong demand for digital media even as economies reopen. Looking ahead, evolving media habits supported by the rise of mobile devices and increasingly faster internet connections provide a compelling investment case for the digital innovation revolutionizing consumer entertainment. Today’s note discusses the S-Network Global Streaming and Gaming Index (STREAM) and how it’s positioned to benefit from the secular shifts driving growth for multiple forms of digital media entertainment.

STREAM Differentiated by its Unique Construction

The S-Network Global Streaming and Gaming Index (STREAM) captures a wide range of technology-driven consumer shifts that are redefining media entertainment, including the shift from traditional media content to online-based streaming media services (i.e., On-Demand Media) and the evolution of video games into globally interconnected platforms that have given rise to competitive video gaming (E-Sports) and remote wagering (iGaming).

STREAM’s unique construction consists of screening companies across its three S-Network business segments: Content Streaming, E-Sports, and iGaming. All eligible securities are ranked by a score based upon their market capitalization and average trading value, with the top 15 companies within each segment selected. Constituents are weighted based on float-adjusted market capitalization, modified for a maximum weighting of 4.5% and minimum weighting of 0.5%. Unlike a typical “on-demand” index, STREAM has a tilt toward gaming. However, as opposed to gaming indexes with narrower exposure, STREAM’s construction adds an angle of content streaming, which may provide benefits from a broader consumer base and the ongoing shift from traditional TV to digital media content (i.e., “cord-cutting”). For more details on the index methodology and construction, see the index website here.

In 2021, consumer preference for media streaming held firm even as economies began reopening. This comes after the demand for streaming services strongly accelerated in 2020 at the onset of the pandemic. As seen in the chart below, music and video subscriptions reported by leading providers saw continued growth in 2021. Moreover, quarterly subscriber growth grew at an accelerating rate as 2021 progressed, during the same time global lockdown measures eased and economies reopened. With 2021 estimates suggesting that roughly 71% of U.S. households still had some form of pay-TV service (e.g., cable, satellite), the shift to video streaming has ample room for more growth ahead.(1)

At the industry level, the number of video streaming platforms has been on the rise in recent years as media giants have been investing heavily to keep up with the growing demand for streaming services. Disney (DIS), who owns video streaming platforms Hulu and ESPN+, launched Disney+ in late 2019, which has already amassed over 129 million subscribers.(2) In aggregate, global content spending topped $220 billion in 2021 and is expected to surpass $230 billion in 2022(3)—fueled by increased spending on streaming services to support a stronger lineup of video streaming options following pandemic-induced production delays that plagued much of the media entertainment industry in 2020-2021. DIS plans to spend $36 billion on content in 2022,(4) which marks an $8 billion increase year-over-year that incorporates higher spending to enhance video streaming offerings. Netflix (NFLX), the leader in video streaming, is also bumping its 2022 content spend to $17 billion after spending $12.8 billion in 2021.(5) With the significant investment in content ahead, wider selection and an enhanced video streaming universe could entice cable and satellite consumers to make the switch to streaming services. At the end of February, content streaming represented 24% of the STREAM index by weighting.

Video Games and E-Sports: A Way of Life, During and After the Pandemic

With many people turning to gaming for entertainment and social interaction during lockdowns, the global video game industry has arguably been among the biggest beneficiaries of COVID-19. According to estimates, global video game revenues rose by $30 billion in 2020,(6) representing a 24% yearly increase. Despite expectations that video game revenues would shrink amid easing lockdowns, revenues continued their upward trend, growing by $2 billion in 2021.

With younger generations becoming increasingly reliant on technology, gaming has become a regular part of life for many. Moreover, the videogame shift to digital content delivery—including subscription-based game play and cloud gaming—is also helping keep gamers more engaged. According to the annual report released by the Entertainment Software Association (ESA), about 55% of U.S. video gamers reported playing more during the pandemic, and 90% reported they will continue playing even after social distancing is no longer required.(7) Moving full steam ahead, the gaming industry is on track to reach $219 billion in revenue by 2024.(8) 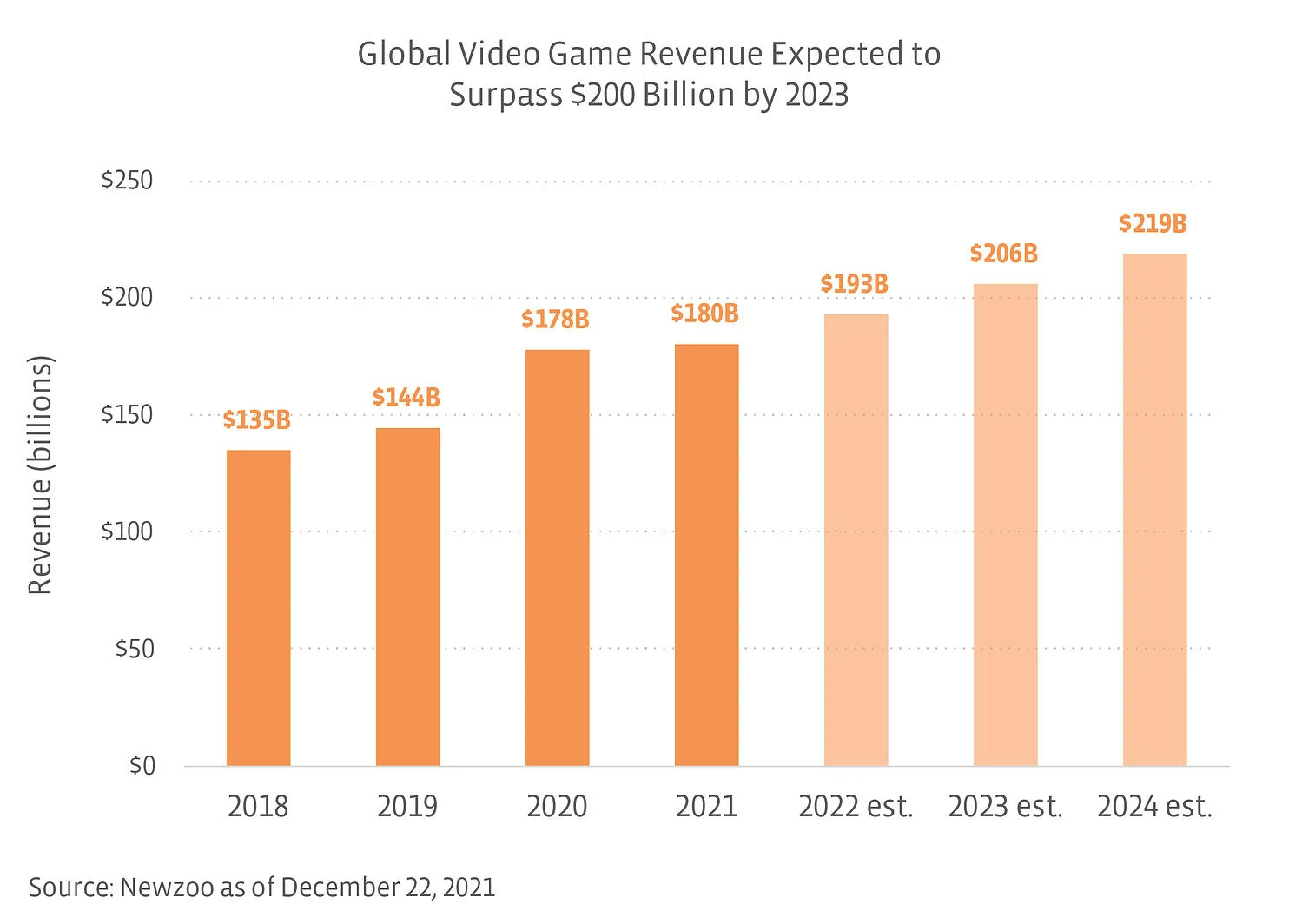 Notably, consumers are not only playing video games at increasing rates, but they are also turning to video games to watch influential gamers and live stream professional gaming competitions (E-Sports). This has been possible thanks to the rise of game-specific streaming platforms such as Twitch and YouTube Gaming, which have contributed to rising video game popularity by building a gaming community while supporting content creators and game developers. The number of live video game hours watched on the leading game streaming platforms rose by 82% to 29 billion hours in 2020, growing by a further 21% or 6 billion hours in 2021. Notably, growing viewership has led to the explosive growth of E-sports—with some events routinely drawing millions of viewers.(9) Estimates project the E-Sports market generated ~$1.3 billion in revenue in 2021, and forward projections suggest revenue could reach ~$2.9 billion by 2025.(10)

The video game industry is undergoing a wave of consolidation amid an acquisition spree that has recently accelerated, and multiple video game names have become subject to takeover speculation. In 2021 alone, $85 billion in deals took place across the video game industry.(11) More recently, Microsoft (MSFT) announced in January it would acquire Activation Blizzard (ATVI) for $69 billion,(12) propelling ATVI’s stock by almost 20% and marking by far the largest deal ever seen in the gaming space. With the growing potential for technology firms to acquire video game producers to capitalize on evolving trends related to cloud gaming and virtual reality (i.e., the metaverse), M&A activity is not expected to cool anytime soon. At the end of February, E-Sports represented 51% of the STREAM index by weighting.

With over a dozen states now legally permitting online sports betting,(15) and other states with bills introduced to do so, the rise of online sports betting is expected to drive iGaming to new heights. Forward estimates suggest the dollar amount of sports bets placed in the U.S. could reach as much as $9.4 to $12.7 billion by 2025,(16) with the likelihood that a growing chunk of those bets are placed online as mobile betting apps continue their surge in popularity. At the end of February, iGaming represented 25% of the STREAM index by weighting.

The wide range of technology-driven consumer shifts that are redefining media entertainment look set to continue in a post-pandemic world. As evolving preferences and the growing adoption of mobile devices drive continued growth for digital media entertainment, STREAM’s multi-sector exposure offers a diversified approach to streaming and gaming with long-term growth potential.

[12] Microsoft to gobble up Activision in $69 billion metaverse bet