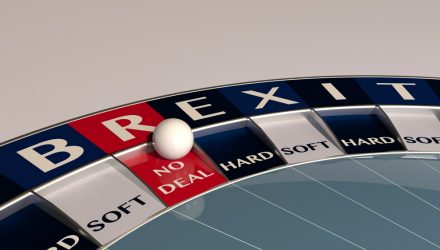 United Kingdom country-related exchange traded funds are under pressure again just as traders begin to look past the coronavirus pandemic and refocus on the stalled Brexit negotiations.

According to FactSet data, speculative traders and hedge fund investors have taken the largest positions against the British pound since November, signaling increased expectations of further weakness ahead, the Wall Street Journal reports.

Many believe that the strength of the U.K.’s economic recovery will be heavily reliant on the country’s ties with the European Union, its largest trading partner. Britain officially divorced from the EU in January, and both sides are still negotiating on a trade agreement. Without such a deal, the U.K. could suffer higher tariffs on goods next year.

“We still have this looming concern that we are potentially headed toward a no-deal Brexit,” Jane Foley, head of foreign-exchange strategy at Rabobank, told the WSJ. “If we don’t get any positive news, I think we can gradually drift a little bit lower on sterling.”

While Prime Minister Boris Johnson expressed optimism about an agreement, there are no concrete details about the timing and specifics of what a new deal would look like.

Further weighing on the British pound currency, traders anticipate the Bank of England could cut interest rates below zero to support the economy, which would further depreciate the GBP. The BoE warned that the U.K. economy could contract 14% this year and have not ruled out negative rates to soften the economic fallout.

Some observers argued that a negative rate outlook is more likely without a trade agreement with the EU in place. According to ING Bank, the market is pricing in a possible negative rate by February 2021.

Subzero rates would be “a function of the economy, and the economy is a result of the negotiations between the U.K. and the EU,” Petr Krpata, Chief Foreign-Exchange Analyst for Europe, the Middle East and Africa at ING, told the WSJ. “If the U.K. is not doing well, potentially because of the U.K.-EU negotiations, the Bank of England would have to loosen monetary policy.”