You are at:Home»ETF Strategist Channel»The Specter of a Trade War: 3 Questions on Tariffs and Markets 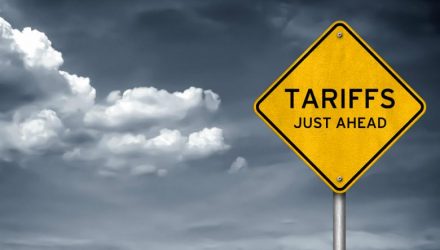 The Specter of a Trade War: 3 Questions on Tariffs and Markets

At the dawn of the Trump administration a little over a year ago, equity investors were both hopeful and anxious. Hopeful for tax cuts and increased infrastructure spending, and anxious given of the potential for protectionist trade policy. On one hand, fiscal stimulus lifts growth and growth-oriented financial assets, while protectionist trade policies lead to higher costs and lower corporate profit margins, lowering economic growth in the process.

The administration is trying to deliver on both counts. Fiscal stimulus materialized in the form of tax cuts last year, and the recent proposal of substantial steel and aluminum tariffs have sparked trade tensions and spurred market volatility.

How should investors think about tariffs, and how could they affect markets? Here are 3 questions to consider:

How do Tariffs affect growth?

Tariffs have a negative effect on the growth of the countries imposing the tariff as well as the countries they are imposed upon.

Most simply, a tariff is a tax on an imported good, and by raising the price of a good produced overseas, the country enacting the tariff hopes to increase the attractiveness of a domestic good or industry, protect national security of strategically vital industries, or retaliate to another country’s tariff.

There is a benefit for the domestic producer of the tariffed good in lower competition and increased prices; however, the cost to the larger economy far outweighs the benefits. In the case of US companies that utilize steel and aluminum as inputs into their production, those input costs then rise and affect corporate profitability which spreads into the larger economy. The country which the tariff is imposed upon experiences a negative effect on its growth due to lower demand for its goods. That country could then initiate its own tariffs as a retaliatory measure, which reinitiates this dynamic of a negative hit to growth and could spiral into a trade war.

The US makes the first move, where do we go from here?

Things to watch will be:

Further escalation would heighten negative sentiment and increase the probability of a global slowdown. We are only the in the beginning stages.

What do investors do if tensions escalate?

The past 18 months have been marked by synchronous global growth and rising inflation expectations. The specter of a trade war threatens to reverse that trend of inflation to deflation. Diversification will be important. In an inflation scare, such as in February 2018, bonds and equities under-perform at the same time. In an equity sell-off driven by fears of deflation, fixed income should resume its role as a diversifier to balanced portfolios.