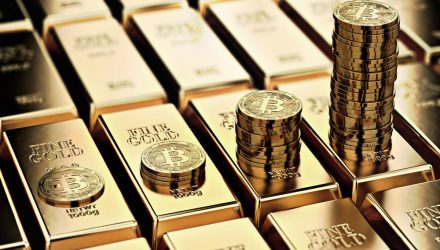 “Launched just two years ago, SPDR Gold MiniShares (GLDM) quickly established itself as the market leader in the increasingly crowded space of low share price/low expense ratio gold-backed ETFs in the US. In fact, in that brief timespan, GLDM has become the third-largest physically-backed gold ETF in the US,” George Milling-Stanley, Chief Gold Strategist at State Street Global Advisors, told ETF Trends in an email.

Since its launch on June 25, 2018, the SPDR Gold MiniShares Trust is now the third-largest physically-backed gold ETF in the United States. GLDM technically reached its number three spot in less than 2 years on March 18, 2020, and it attracted over $1 billion in net inflows year-to-date.

GLDM and the SPDR Gold Shares (NYSEArca: GLD) have captured $14.3 billion of the $20 billion, or 70%, of year-to-date flows into the U.S. physically-backed gold ETFs.

The SPDR Gold MiniShares Trust comes with a much cheaper 0.18% expense ratio and was initially listed at a per-share trading price of 1/100th of an ounce of gold, as represented by the LBMA Gold Price PM (USD). The low-cost gold ETF has quickly been attracting attention from buy-and-hold investors who are interested in the long-term benefits of incorporating a cheap gold investment into a diversified portfolio.

The sudden rise of GLDM has not detracted from the ongoing popularity of GLD as a gold trading tool. In the three years before GLDM’s launch, GLD attracted 53% of net flows while other U.S. gold-backed ETFs brought in 47% of inflows. After GLDM’s launch, GLD attracted 57% of net inflows, compared to 7% for GLDM and 36% for other U.S. gold-backed ETFs.

“The fact that GLDM has grown consistently alongside the continued expansion of the overall market leader SPDR Gold Shares (GLD) demonstrates that there is clearly a market for both products,” Milling-Stanley said. “Some long term buy and hold investors have shown a preference for GLDM and its lower share price (based at launch on the price of one-hundredth of an ounce of gold) and lower expense ratio (at just 18 basis points on a par with the lowest in the space). Other investors still value the trading efficiencies that GLD’s greater liquidity provides, with low entry and exit costs, together with a deep and liquid options market.”