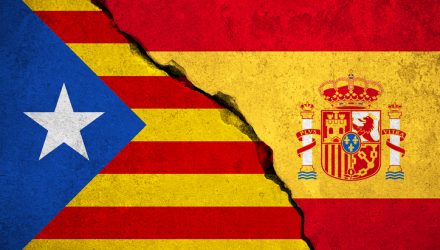 Spain’s markets and country-related ETFs declined Monday after over two million Catalans voted to secede, fueling political uncertainty in one of the region’s top performing economies.

The uncertainty also triggered a sell-off in the euro currency, with the CurrencyShares Euro Currency Trust (NYSEArca: FXE) down 0.7% as the EUR weakened to $1.1739.

However, the weakness in the euro helped showcase the currency-hedging effects of specialized ETF strategies like the iShares Currency Hedged MSCI Spain ETF (NYSEArca: HEWP), which only dipped 1.2% Monday.

“After the French election, a lot of risk premium was priced out of Europe… but now we have another against-the-status-quo European vote, so for financial markets, political risks in Europe have increased,” UBS currency strategist Constantin Bolz told Reuters. “There will be a little bit of noise going through the week, but overall our expectation is that it will not have a dramatic, long-lasting impact.”

Spanish markets lagged behind other European equities after Sunday’s vote, which Spain’s constitutional court declared illegal and the government of Mariano Rajoy had tried to impede, the Financial Times reports.