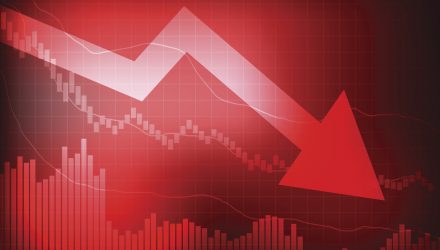 The technology sector continues to get trounced as the S&P 500 followed the Nasdaq Composite into correction territory, falling as much as 10% from its 52-week high. Third-quarter results from the likes of Amazon and Google showed better-than-expected earnings, but missed on revenue.

The Nasdaq Composite was down over 200 points Friday as the once-heralded FANG (Facebook, Amazon, Netflix, Google) stocks have been languishing amid October’s sell-off. On Wednesday, the Nasdaq experienced its worst loss since August 2011 as companies like Texas Instruments and AT&T reported weak third-quarter results.

Amazon reported better-than-expected earnings, but shares of the online retailer fell after hours by as much as 8% and another 8% to start Friday’s trading session as of 11:00 a.m. ET.

Amazon’s earnings per share came in at $5.75 versus forecasts of $3.14, according to Refinitiv. However, revenue generated came in at $56.6 billion as opposed to the estimated $57.10 million expected by analysts.

Amazon’s total revenue climbed 29% as opposed to last year with sales up in North America by $34.3 billion or 35% from last year. Additionally, international sales were 13% higher than last year to $15.5 billion.

“Amazon continued to demonstrate that its various investments are resonating with its very broad and fast-growing customer base, with impressive results across the board,” Charlie O’Shea, Moody’s lead retail analyst, said in a statement.