You are at:Home»Equity ETFs»S&P 500 Gains, Pulls Itself from Correction Territory 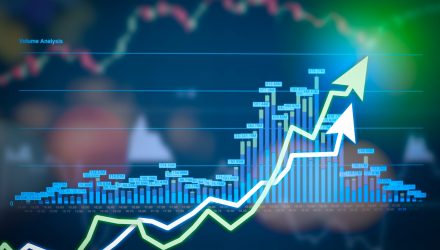 After heading into correction territory amid more sell-offs last week, the S&P 500 recouped its losses Tuesday morning to settle for a 0.56% gain as of 11:00 a.m. ET.

The Dow Jones Industrial Average rallied over 150 points, while the Nasdaq Composite rose 0.50% as technology giants like Amazon and Google parent company Alphabet also gained in the early session of what’s been a volatile October for U.S. equities. Through last Friday’s trading session, the Dow was down 6.7%, while the S&P 500 and Nasdaq were down 8.8% and 10.9, respectively.

Amid third-quarter earnings reports, the Dow experienced four out of five losing sessions last week as technology stocks continued to sell off, signaling a sign that the decade-long bull run could finally be coming to a close. Yesterday, the Dow lost another 200 points to start the week after being up as much as 300 early on–analysts expect more of this market volatility to come.

“Obviously we’re in a correction phase of the stock market and I think investors have to realize that,” said Bruce Bittles, chief investment strategist at Baird. “The monetary environment has changed. As you can see, even with a 10 percent change in the stock markets, interest rates have barely moved lower.”

“Typically bull markets are global in scope and the question was would we follow the rest of the world of would they follow us? I think we’ve found the answer,” Bittles added.

Yesterday, Treasury yields rose and more threats of tariffs from the United States to China roiled the markets once again. Rising interest rates and trade wars have had investors fretting lately, but analysts aren’t quick to dismiss U.S. equities just yet.