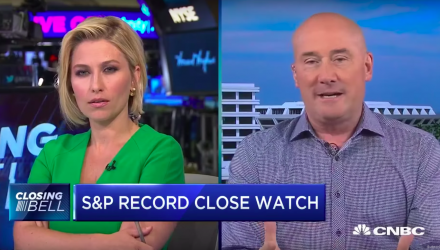 On the heels of the S&P 500 closing at a near all time record high Friday, recession worries are simultaneously peaking. Tom Lydon, ETF Trends CEO, appeared on CNBC’s ‘Closing Bell‘ with hosts Wilfred Frost and Morgan Brennan to sort it out and spot opportunities.

Talk to any market watcher and all you’ll hear about these days is imminent recession. Yet this week the S&P was up more than 2% and 7.5% for the month of June. The stats don’t seem to support a recession but “that’s the whole point,” said Charlie Bobrinskoy of Ariel Investments, who joined Lydon on today’s segment.

“That’s why we’ve gone up,” he said. “Because people have been so negative. When you have to be nervous is when you’re pessimistic and the whole market is optimistic.”

As for ETF investors, they are falling into camp optimism, according to Lydon.

“If you look at ETF investors, they’ve been really resilient this year,” he said. “We’ve seen billions of dollars coming into ETFs in notable areas that have been unloved, including emerging markets.”

Another outlier has been gold.

“We see gold hitting a six-year high right now,” Lydon noted. “GLD, the biggest gold ETF, is attracting a lot of money in the last month as gold has been up over 10%.”

The secret to maintaining the current trajectory? Stability, according to Lydon.

“The messaging from the Fed needs to be consistent, as we’re counting on Fed cuts—maybe one, maybe two. With this lower dollar and trade balance, its going to be that much better for global economies,” he said.