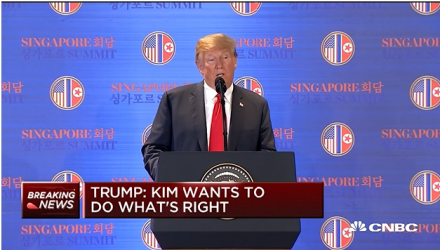 3. Reaffirming the April 27, 2018 Panmunjom Declaration, the DPRK commits to work toward complete denuclearization of the Korean Peninsula.

4. The United States and the DPRK commit to recovering POW/MIA remains, including the immediate repatriation of those already identified.

Many experts feel the peace document is simply a matter of window dressing since the document lacks succinct details on how the actual denuclearization process will take place. Moreover, there is no guarantee that North Korean leader Kim Jong-un will follow through on the steps outlined in the agreement itself.

“Unfortunately, the entire document is short on details,” said United States Senate minority leader Chuck Schumer. “It is worrisome, very worrisome, that this joint statement is so imprecise.”

Until there is a more definitive outline that details the particulars regarding denuclearization, the markets could remain skeptical in the future.

For latest news on North Korea and the Summit in Singapore, visit our North Korea category.