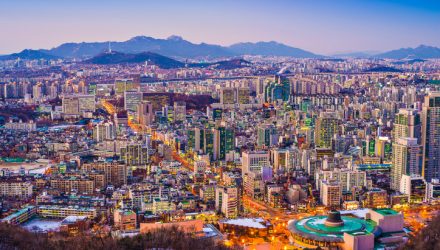 The iShares MSCI South Korea Capped ETF (NYSEArca: EWY) is up nearly 8% over the past month, bringing its year-to-date gain to close to 40% and on Tuesday, the South Korea exchange traded fund broke out to new highs.

EWY, which tracks the MSCI Korea 25/50 Index, holds 112 stocks. Amid the geopolitical wrangling, the ETF has recently lost some assets, but is traditionally a favorite among investors due to South Korea’s advanced economy and the country’s emphasis on technology.

“The runaway rally in EWY may come as a surprise to those who have followed the breathless (and seemingly endless) headlines warning of an imminent nuclear strike by South Korea’s contentious neighbor to the north,” according to Schaeffer’s Investment Research. “But make no mistake; the low-volatility uptrend in EWY is currently accompanied by a volatility skew that points to a fairly robust degree of anxiety among Seoul-focused speculators.”

South Korea, Asia’s fourth-largest economy, is the second-largest country weight in the MSCI Emerging Markets Index behind China. The $3.9 billion EWY is about 17 and a half years old, making it one of the oldest emerging markets single-country ETFs. EWY has a three-year standard deviation of just over 17%, which is low compared to many other single-country emerging markets funds. That historical lack of volatility is one reason why EWY is a favorite among investors.

“As of Thursday, 30-day historical volatility on EWY registered a new 52-week low of 9.8%. Meanwhile, as of about midday Friday, Trade-Alert pegged the 30-day at-the-money implied volatility (IV) at 16%, in the 16th percentile of its annual range — generally speaking, a fairly reasonable premium over the unusually low realized volatility figure,” according to Schaeffer’s.