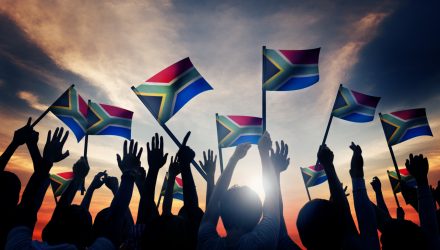 Following a regime change that was expected to be positive for South African financial markets, the iShares MSCI South Africa ETF (NYSEArca: EZA) is lower by nearly 18% year-to-date, making it one of the worst-performing single-country emerging markets ETFs.

Previously, investors expected President Cyril Ramaphosa, who replaced the controversial Jacob Zuma, to be positive for the country’s financial markets. Some analysts and market observers believe the departure of the controversial Zuma will reduce risk for South Africa’s economy and related financial assets, but that has not been the case this year.

“South Africa’s ratings are weighed down by low trend growth, sizeable government debt and contingent liabilities and the highest inequality in the world, which raises policy risks,” said the ratings agency. “These weaknesses are balanced by a favourable government debt structure, deep local capital markets, a healthy banking sector and strong institutions. The affirmation and Stable Outlook takes into consideration signs of recovering governance standards and the prospect of a mild cyclical recovery but also indications that financial challenges at key state-owned enterprises (SOEs) remain substantial and the fact that government debt has yet to stabilise.”

Although Ramaphosa is still viewed as a better alternative to the departed Zuma, the new president has some tough economic data points to deal with.