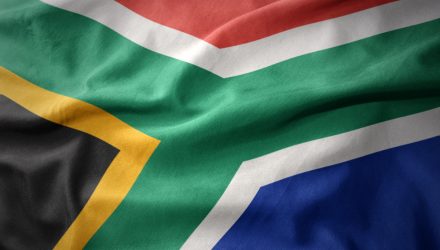 A South Africa country-specific exchange traded fund surged Wednesday, with bigger companies that have a large international footprint leading the charge, as the country suffers through its worst unrest in years.

Rand-hedge giants like BHP Group Plc, Richemont, Anglo American Plc, and Naspers Ltd. were among the better performers in Johannesburg after the South African currency weakened to its lowest level against the dollar since April, Bloomberg reports. The rand currency has depreciated as much as 3.4% so far this month.

The gains on Wednesday may also be interpreted as a short relief rebound after South African markets saw steep declines in the wake of the unrest. Negative foreign sentiment toward South African markets was reflected by large outflows on Tuesday, with non-residents dumping 4 billion rand, or $271 million, of local equities, the most since November.

Even before the riots, South Africa has struggled with social pressures associated with the ongoing coronavirus pandemic. The emerging African economy has an unemployment rate of over 32%, the highest in the group of 20 major economies.

The unrest and looting erupted after the jailing of ex-president Jacob Zuma. Protests are linked to Zuma’s imprisonment for ignoring a constitutional court order to give evidence at an inquiry investigating high-level corruption during his nine years in office until 2018, Leader Post reports.

“This is an economy that has been bouncing back faster than many expected from six months ago, but for the average person unemployment remains one of the highest in the world and recovery has been concentrated on exports, so doesn’t necessarily lift all boats,” said UBS’s head of emerging market strategy Manik Narain.