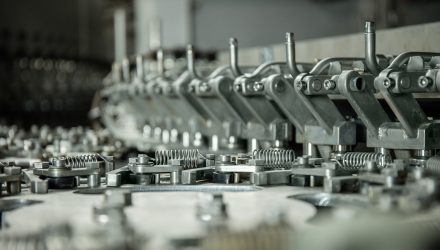 Some Love For a Tattered Industrials ETF

The industrial sector, the sixth-largest sector weight in the S&P 500, languished last year. The Industrial Select Sector SPDR ETF (NYSEArca: XLI), the largest exchange traded fund dedicated to the sector, finished 2018 with a loss of 14.88%, more than twice as bad as the S&P 500’s loss for the year.

The allure of late-cycle sectors, including industrials, in a rising rate environment remains in place. Industrials perform well when interest rates rise because rising rates can go hand-in-hand with economic growth. Increased infrastructure spending is also seen as a catalyst for industrial stocks and ETFs.

In 2018, however, the industrial sector and other cyclical groups, betrayed late cycle reputations. Industrials, in particular, were hampered by trade tariffs and some laggard performances by some of the sector’s marquee names. Still, some investors nibbled at XLI ahead of the new year.

“The $10 billion Industrial Select Sector SPDR Fund, ticker XLI, took in $708 million last week, the most since January. Shares of the ETF have also gained, rising more than 5.5 percent since Dec. 24,” reports Bloomberg.

When the industrial sector performed well in 2017, much of that upside was attributable to aerospace and defense names. Potential catalysts for aerospace ETFs include include, renewed airline pricing power evidenced by higher ticket prices, and more fees paid per traveler, increased airline profitability, new aircraft program launches and continued demand for aircraft models and technology.