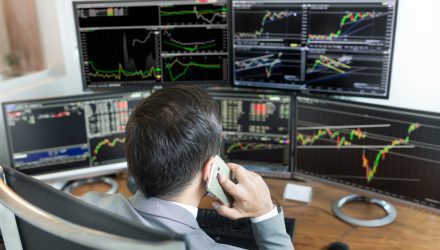 Not every fund provider is jumping on to the actively managed, non-transparent exchange traded fund market while others see the innovative fund structure as next big thing.

For example, Vanguard Group and State Street Corp., the second and third largest ETF providers by assets under management, will take a wait-and-see approach to active, non-transparent funds, Bloomberg reports.

“This is an opportunity for us to learn from what others are doing,” Vanguard’s Rich Powers told Bloomberg. “Investors make their way to great active strategies, regardless of whether it’s first to market.”

The new active non-transparent ETF products come with many of the same benefits we have enjoyed with traditional ETFs, but the new structure reduces the need for daily disclosures, which may help bring more stock-picking managers into the ETF space.

Meanwhile, some of the biggest financial players are already dabbling with the nontransparent ETF idea. For example, BlackRock Inc. has filed to use the structure after the funds debuted in April. JPMorgan Chase & Co. is also working on its own active nontransparent ETFs and projects the non-transparent ETF industry could ultimately command over $7 trillion in assets as more traditional fund managers transition over to the efficient ETF structure.

State Street’s Rory Tobin argued that there are two big hurdles to attracting investors to this new type of fund: First, the dominance of passive strategies, which make up over 95% of all U.S. ETF assets. Second, the relative higher cost of these new active non-transparent strategies.

“You’ve got your investment proposition, you’ve got your ETF mechanics, and then there’s the economics,” Tobin, global head of State Street’s SPDR ETF business, told Bloomberg. “How do investors feel about the price point at which these are being positioned?”

Nevertheless, the new players are optimistic that the popularity will pick up as more catch wind of the strategy.

“Almost no one was launching ETFs, and almost everyone was pulling theirs back,” Edward Rosenberg, head of ETFs at American Century, told Bloomberg.