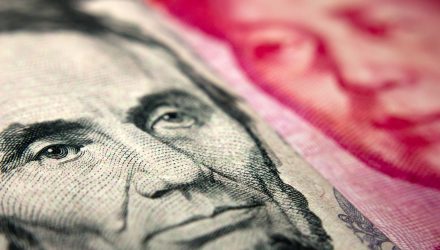 In the wake of President Donald Trump’s tariff on Chinese imports, Beijing countered with plans to impose trade barriers of its own, dragging down solar and metal mining related exchange traded funds Friday.

Among the worst performers Friday, the SPDR Metals & Mining ETF (NYSEArca: XME), which has a hefty tilt toward U.S. steel, fell 2.4% and the Invesco Solar ETF (NYSEArca: TAN), the largest ETF dedicated to solar stocks, declined 3.0%.

Washington D.C. imposed a 25% tariff on $50 billion in Chinese goods Friday. In response, China’s Ministry of Commerce said it would tack on trade barriers of the “same scale and the same strength,” and that Trump’s tariffs were “damaging” relations and “undermining the world trade order,” the Washington Post reports.

According to the White House, the import tax would apply to “goods from China that contain industrially significant technologies.” The administration argued that China forced foreign companies to surrender technology secrets in return for market access and acquired U.S. technologies through cybertheft and investment in start-ups.

“These practices… harm our economic and national security and deepen our already massive trade imbalance with China,” Trump said.

Potentially escalating tensions into a tit-for-tat trade war, the president stated the U.S. would “pursue additional tariffs” if China responded.

China has exhibited a history of focusing on industries like steel or solar energy for growth, which came with excessive investment by its state-led firms. The actions would in turn flood global markets with cheap Chinese goods, pressuring prices to unsustainable levels and making it all but impossible for private companies to compete, a White House senior administration official said. Consequently, the official argued that American companies will continue to lose out on a range of advanced technology markets if China’s state-led companies maintain their current industrial policies.