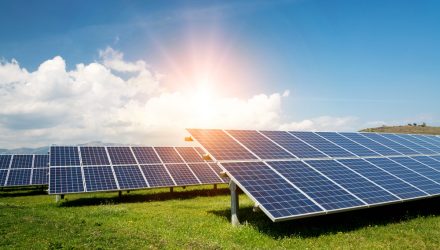 On Wednesday, the Invesco Solar ETF (NYSEArca: TAN) advanced 6.0% and the Global X Solar ETF (RAYS) increased 6.4%, with both solar ETFs trading above their long-term resistance at the 200-day simple moving average.

Enphase’s strong quarter was backed by expanding partnerships that helped its micro-inverters and energy storage businesses.

Belgium and Germany have signed an exclusive deal to acquire Enphase’s IQ Batteries to support the most common third-party string inverters to meet the rising demand for energy independence across the region in response to rising fossil fuel costs.

The Enphase IQ8 Microinverter system became the first to be certified by UL, a global safety science leader, based on the new North American safety and grid interconnection standards for connecting solar inverters, energy storage systems, and distributed energy resources to the grid.

“Our strategy is to build best-in-class home energy systems and deliver them to homeowners through our installer and distribution partners, enabled by an installer platform,” according to Enphase.

Looking ahead, Enphase projects that revenue will fall within a range of $590 million to $630 million, including shipments of 130 to 145 megawatt hours of Enphase IQ Batteries, for the third quarter of 2022.