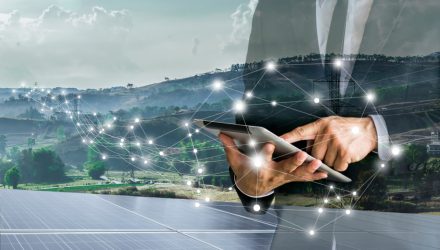 The solar industry may be strengthening the broader rally in growth stocks as some investors bet that the Federal Reserve won’t act too aggressively to wrangle inflation during these more uncertain times, which would help support or at least pare recent losses among growth companies.

The Power Of The Sun

Solar stocks could also rise as China plans to add record solar power capacity to its energy grid. China’s solar power capacity is projected to expand by 75 to 90 gigawatts in 2022, a record high jump, as the country tries to cut down on carbon emissions by raising renewable energy, Ecns reports.

Around 90% of countries worldwide are working on their own net-zero plans to combat climate change, and many major countries have looked toward solar energy as a major tool in their fight.

Furthermore, Tencent Holdings Ltd is also raising its use of renewable energy with a goal of zeroing out emissions by 2030, taking up Beijing’s call to protect the environment, Bloomberg reports. The Chinese social media and gaming giant has already acquired 500 million kilowatt-hours of wind and solar energy this year, or the equivalent to the electricity consumption of 40,000 American homes for a year, to power data centers.